This article is using {{Card template}}.
See Help:Style guide/Card for how to edit this kind of article.
Edit this article
Divine Spirit
1361 • CS2_236
Regular 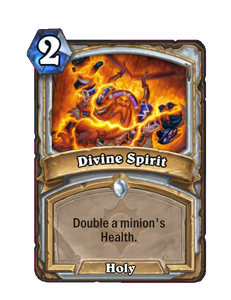 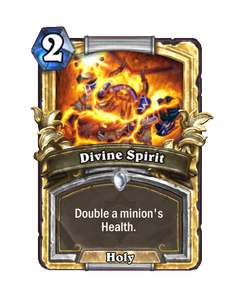 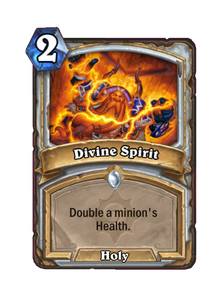 Divine Spirit is a common priest spell card from the Legacy set, formerly from Hall of Fame and Basic sets. 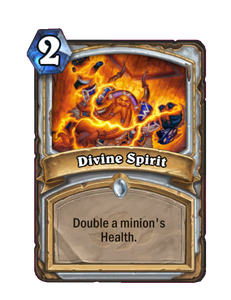 This card works very well in combination with Inner Fire, Power Word: Shield and minions with a lot of hit-points such as Shieldbearer, Oasis Snapjaw, Mogu'shan Warden or Gurubashi Berserker. It also works extremely well with Lightspawn.

When using other Health-increasing effects such as Power Word: Shield on the same minion, always use Divine Spirit last to include those buffs in the multiplicative effect. Heal damaged minions whenever possible before using Divine Spirit.

With the right circumstances, this card can be used as part of a devastating combo usually featuring Inner Fire and other Health buffs like Power Word: Shield. Using all of these cards in a single turn can lead the priest to quickly acquire a minion with extraordinarily high Health and more importantly Attack. For example, a basic 3/5 Sen'jin Shieldmasta can be buffed with Power Word: Shield (3/7) then Divine Spirit (3/14) then another Divine Spirit (3/28) then Inner Fire to produce a 28/28. The higher the starting Health the better; casting these spells on an Oasis Snapjaw will produce a 36/36. The ideal chain of cards involves 2 x Power Word: Shield (and any other buffs available) followed by 2 x Divine Spirit and then Inner Fire. With the right minion and spells, these numbers can be far higher, all within the space of a single turn.

While creating a monstrous minion is generally an advantage for the controlling player, the main strategic play with this combo is to use the minion to immediately deal damage, preferably to the enemy hero themselves. In perfect circumstances, this can allow the priest to defeat a full-Health opponent in a single turn. However, key to seizing this advantage is the ability to attack with the minion. For this reason it's best to cast these spells only once a suitable minion is in place and ready to attack. Be aware that your opponent may play a removal card as soon as they are able, or worse still a mind control effect, so it's important to make the most of the minion while you can.

However, this combo at its fullest can be very hard to arrange, and may require the priest to hold cards for several turns until the right minion and spells are drawn. In addition, the right board can neutralise this combo's advantage; a single taunt can prevent you from attacking the enemy hero for long enough for them to effortlessly remove it with an appropriate spell. Buffing a minion to these levels when you are not able to immediately put it to use will also give the other player every reason to remove it during their turn. For this reason, waiting until you have a minion that is ready to attack - either a minion summoned last round or a freshly summoned minion with Charge - is highly recommended (Stormwind Knight, with 5 HP and Charge, is a good example).

While creating a particularly massive minion may be particularly entertaining, this is often not necessary in order to use this combo to steal victory. Using this combo with half these cards can still buff a minion enough to quickly finish a wounded opponent.

Understandably, this combo is infamous among players (especially non-priests) as it can allow the priest to end the game in a single turn, sometimes even when their opponent is at full Health.

The main counter to this combo is to ensure that you have a taunt minion active. Without one, there is no way to prevent a priest fortunate enough to have the right cards in their hand from dealing you substantial damage at any time. Also, watch for Lightspawn. While not essential for the combo, its appearance on the board may herald the priest's combo next turn, so placing a taunt or removing the Lightspawn is highly recommended.

Ultimately, the major factor preventing priests from consistently winning using this combo is the difficulty in obtaining all of the right cards, at the same time. If your priest opponent is holding back, playing from the top of the deck while keeping several cards unplayed, they might just be planning a combo such as this. Counter this by being aware, if possible keeping a taunt active at all times, or otherwise keeping back a reveal card or two. Alternatively, use the lull in play to pressure your opponent into playing their combo cards out piecemeal in order to survive.

Divine Spirit might be related to a past priest ability of the same name from World of Warcraft. The ability granted the target a buff, increasing their Spirit for 30 minutes, but was removed with Cataclysm.