This article is using {{Card template}}.
See Help:Style guide/Card for how to edit this kind of article.
Edit this article
Divine Favor
679 • EX1_349
Regular 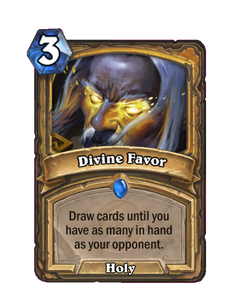 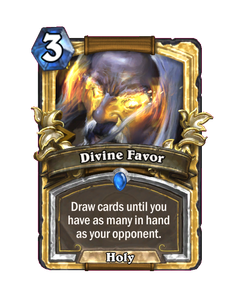 Dimensions: Full • 330 x 410px
Draw cards until you have as many in hand as your opponent.
Flavor text

This is not just a favor, but a divine one, like helping someone move a couch with a fold out bed! 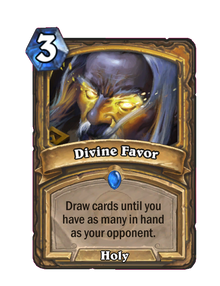 Divine Favor is a rare paladin spell card, inducted into the Legacy set, formerly from the Classic and Hall of Fame sets. 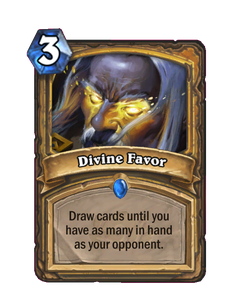 Divine Favor is a powerful option for generating substantial card draw, and potentially gaining a strong lead in tempo/board presence, especially during the early game.

Divine Favor works best in a high-speed deck with lots of cheap cards. Ideally, draw this card early in the game, then play out your hand while your opponent hopefully holds onto theirs. Divine Favor can then be played to draw several cards for only 3 mana, allowing the paladin to gain significant tempo and/or board presence with virtually no drawbacks.

The card becomes less effective as the opponent plays out their hand, and is therefore generally best played early in the game. In the late game it can still be exchanged for multiple cards with luck, or at the worst swapped for a new card at a cost of 3 mana.

Obviously, it's best to empty the hand as much as possible before playing this card, unless you have a specific combo in mind.

Paladins with this card can often be spotted by their rapid emptying of their hand over the first few turns. The opponent may feel confident that the paladin will soon run out of steam, only to find them using Divine Favor to cement their board lead. When a paladin takes this approach, it's usually best to play as many cards as is wise in exchange, for example playing a couple of 2 cost minions rather than a single 4 cost minion, even if it is not otherwise the better play. The key concern is not the wasting of your own cards, but the relative card advantage between the two players, and preventing the paladin from gaining this and maintaining competitive tempo and board control is generally a far better option.

Divine Favor is a Holy paladin ability that increases spell haste and crit chance for a short period, used as a healing or occasionally dps cooldown.

Commentary: Over the past several years, we've seen a number of strong, aggressive Paladin decks. While we like Paladin's identity as a minion-summoning and minion-buffing class with a fair amount of resource generation, card draw doesn't also need to be one of the Paladin's strengths. Divine Favor is one of the most cost-effective draw spells in the game, so to better emphasize other classes' strengths and to provide better control over the power level of future aggressive Paladin decks, we are moving Divine Favor to the Hall of Fame.