This article is using {{Card template}}.
See Help:Style guide/Card for how to edit this kind of article.
Edit this article
Dirty Rat
41567 • CFM_790
Regular 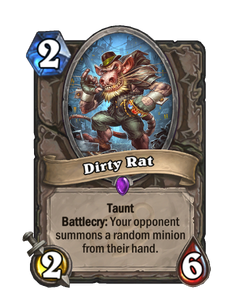 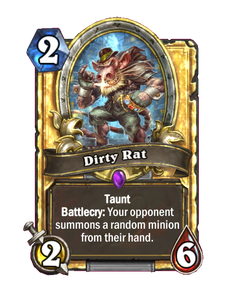 It's not his fault… Someone keeps stealing his soap! 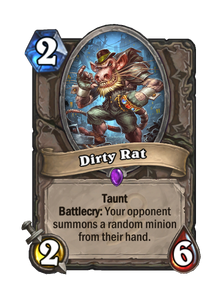 Dirty Rat is an epic neutral minion card, from the Mean Streets of Gadgetzan set.

This minion's considerable stats for its cost are offset by its extremely risky Battlecry. Unless the opponent has a hand full of spells or weapons, chances are they'll have a minion on the field to join Dirty Rat, which will be capable of attacking when the turn ends and without having to pay the Mana cost.

Dirty Rat works well against decks that primarily focus on weak, cheap minions, which it can favorably trade with using its high health and Taunt status. Forcing a minion out of the opponent's hand also prevents the activation of any enemy Battlecries, such as that of Reno Jackson, N'Zoth, and even Quest reward minions. Conversely, the high dependence on random odds means that Dirty Rat could just as easily summon a huge minion, such as those that tend to be run by Druid, Handlock or Dragon decks. It's usually a bad idea to play Dirty Rat on Turn 2, when giving your opponent a big minion for free, even if the Battlecry is denied, could lose you the game due to the enormous tempo gained by the opponent.

Another use for Dirty Rat is against control or combo decks that are reliant on one or several specific minions. Using Dirty Rat to pull out Reno Jackson, Kazakus or Raza the Chained against Highlander decks will deny your opponent a lot of value from the minion's Battlecry or even disrupt their win condition if you pulled out important combo pieces (for example, Sorcerer's Apprentice from an Exodia Mage opponent) and can afford to instantly remove them with board clear or removal. However, this is very difficult due to the random nature of Dirty Rat and requires a lot of patience, preparation and careful hand reading from the player. Brann Bronzebeard can greatly help with the consistency of this strategy.

Combos well with board clears, such as Brawl and Twisting Nether, other effects that benefit from a large number of enemy minions on the field, such as Mind Control Tech, Second-Rate Bruiser and Unleash the Hounds.

It’s not his fault… Someone keeps stealing his soap!

Our card reveal for Mean Streets of Gadgetzan is the dirtiest, blingest, smartest, and unfortunately shortest Kobold in Gadgetzan. Don't let his short stature fool you though, he packs a powerful, gem-filled punch.

Kobolds are a race of diminutive, rat-like subterranean humanoids who dwell in and around caverns and mines throughout the Eastern Kingdoms, Kalimdor and the Broken Isles. They are not particularly intelligent and are notoriously cowardly, preferring to keep their distance from other, larger races. Kobolds are famous for being obsessively protective of the candles they wear upon their heads and which help them light their way through the dark tunnels they call home.

A race of arctic kobolds known as snobolds make their home in the frozen wastes of Northrend.