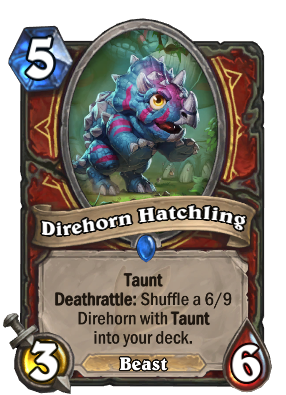 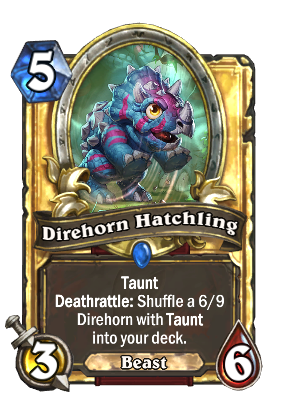 Uncollectible
Taunt
Deathrattle: Shuffle a 6/9 Direhorn with Taunt into your deck.
Flavor text

His mom could beat up your mom.

Direhorn Hatchling is a rare warrior minion card, from the Journey to Un'Goro set.

Direhorn Hatchling can be obtained through Journey to Un'Goro card packs, or through crafting. 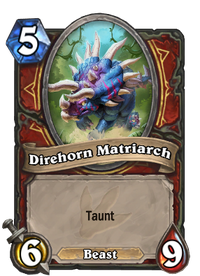 This minion can potentilly offer high value, especially in Quest Warrior deck. It initially has identical stats to Fen Creeper, but shuffles a stat-efficient Taunt into your deck. It can be seen as a weaker version of White Eyes.

Since both Direhorns have Taunt, this card synergises with Fire Plume's Heart. It's also a strong inclusion for decks running N'Zoth for the purpose of board control.

Direhorns are three-horned dinosaurs found mainly on the Isle of Giants and the Isle of Thunder. These saurian titans populate many islands in the South Seas.

The Zandalari breed specific direhorn species for their small size for use as mounts. A common coming-of-age rite among the Zandalari is to travel to one of the violent, beast-ruled islands near the capital to steal or subdue a wild creature, such as a direhorn or devilsaur. Before a Zandalari sets out to tame a direhorn, they are known to traditionally carve sigils into their arm with ceremonial horns, speak to a bestial loa, drink a wild draught, wear a twin-tusk mask, and "roar with the inner voice".

Even at a tiny size, direhorns are known to wreak havoc on unsuspecting victims. There is an old Zandalari saying about wild direhorns: "Run!