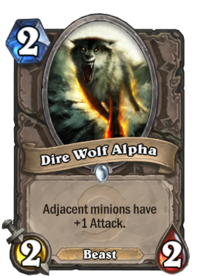 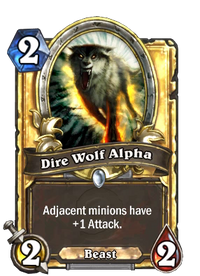 We are pretty excited about the upcoming release of Dire Wolf Beta, just repost this sign for a chance at a key.

Dire Wolf Alpha is a common neutral minion card, inducted into the Legacy set, formerly from the Classic set. 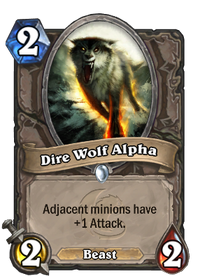 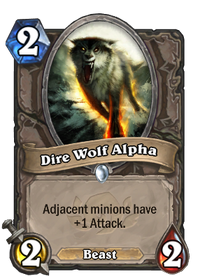 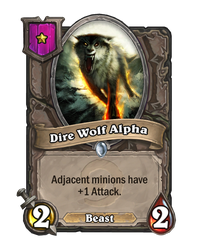 Dire Wolf Alpha can be obtained through Classic card packs, or through crafting.

Two copies of regular Dire Wolf Alpha (Core) are obtained for raising sum of all your class levels to 1.

Two copies of golden Dire Wolf Alpha (Core) are obtained for winning 500 games across all classes.

Dire Wolf Alpha (Core) is uncraftable and cannot be crafted or disenchanted.

Dire Wolf Alpha is a useful buffing minion that improves any adjacent minion. As a Beast, it has natural synergy with numerous hunter decks. Its relatively cheap cost makes it an ideal minion for Zoo or token decks who can utilize the buff by trading weak minions in a chain to take down much stronger minions.

Dire wolves, also known as Darkwolves, are extra ordinary large and powerful wolves. Many, if not all, dire wolves would appear to originate from Draenor. They are the mounts of orcish raiders.