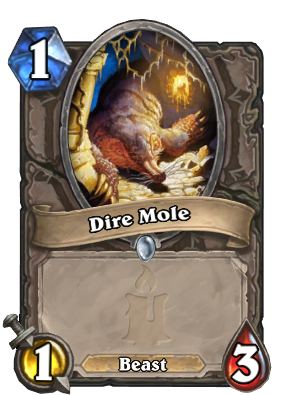 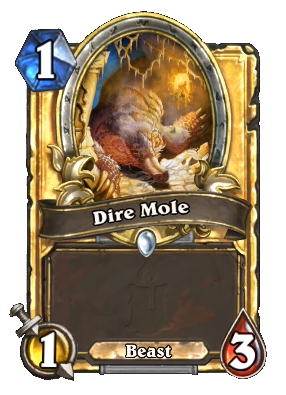 You especially don't want to make a dire mountain out of a dire mole hill.

Dire Mole is an common neutral minion card, from the Kobolds & Catacombs set.

Dire Mole can be obtained by:

Despite the rather tame appearance, this minion has notably good stats for its mana cost. Three health is hard to deal with on 1 mana. The Beast tag also gives it plenty of synergy with Hunter and Druid, allowing for a Crackling Razormaw or Mark of Y'Shaarj on the following turn.

It's also a strong choice for Build-a-Beast, as it will give your Zombeast a sizeable stat increase for only 1 mana more.

Dire moles are creatures unique to Hearthstone. Some have been tamed by the kobolds, who use them as mounts to dig deeper into the catacombs.[1]

The name of this card is likely a play on the World of Warcraft dungeon Dire Maul.