This article is using {{Card template}}.
See Help:Style guide/Card for how to edit this kind of article.
Edit this article
Dinotamer Brann
53926 • ULD_156
Regular 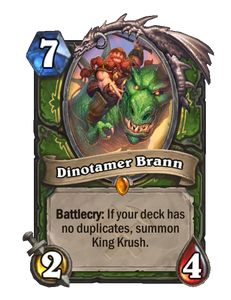 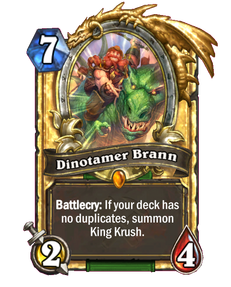 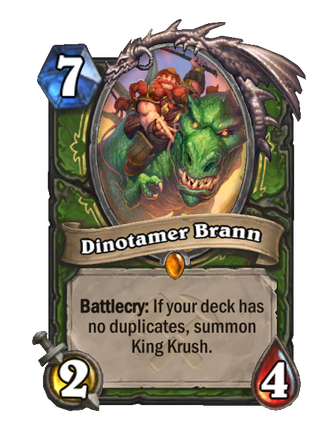 Dinotamer Brann is a legendary hunter minion card, from the Saviors of Uldum set. 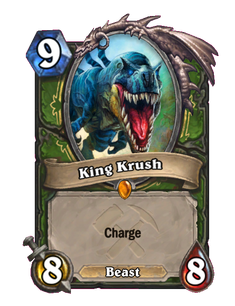 Dinotamer Brann's Battlecry is very powerful on turn 7, summoning an 8/8 Beast with Charge for 2 Mana less than normal. It is a valuable asset in Highlander Hunter decks, and is best used as a finisher. Even if not used to kill the opponent, you will force them to deal with 10/12 in stats, possibly slowing down their recovery. If played on turn 10, he can allow the Hunter to deal 10 damage to the opponent. In dire situations, King Krush can be used to trade into another minion, which will usually still leave a massive threat in play.

Lorekeeper Polkelt can be used to reliably draw Dinotamer Brann on curve if he is your highest-cost card.

Brann Bronzebeard as he appears during the events of Saviors of Uldum, after having learned to train massive dinosaurs.