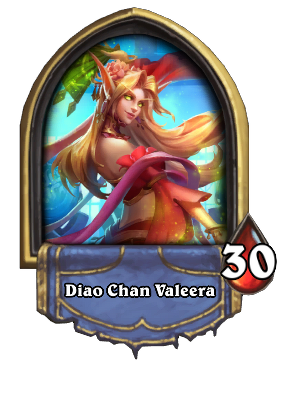 Diao Chan Valeera is an alternate hero for the

Diao Chan Valeera can be purchased through a bundle for returning players only.[citation needed]

Once unlocked and selected for use, Diao Chan Valeera replaces Valeera Sanguinar whenever playing with a Rogue deck, as well as:

When viewed in the collection, Diao Chan Valeera has the following flavor text:

Most of Diao Chan Valeera's sounds are the same as Valeera Sanguinar. Unique, different ones are noted as Unique in References section.