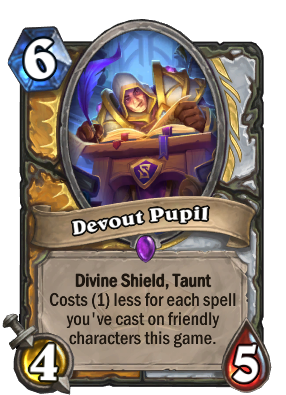 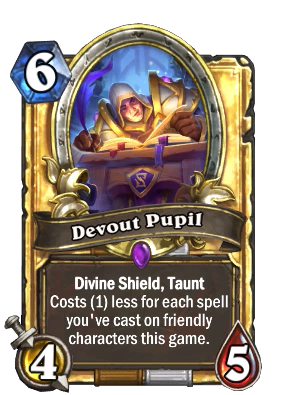 Devout Pupil is an epic paladin/priest minion card, from the Scholomance Academy set.

An equivalent version of Sunwalker with an additional ability to reduce its cost by casting spells on friendly characters.

Similar to Sunwalker , it can take at least two hits as a taunt minion. Buffing it can become a threat for your opponent.

For paladins, there are plenty of targeted-friendly spells such as Libram of Wisdom to essentially have a 0 cost Devout Pupil. Libram of Wisdom is one of the most easiest way to reduce its cost as it can be reused very easily.

For priests, there are few options such as Apotheosis, Psyche Split, Gift of Luminance and variety of healing spells such as Renew to decrease its cost.

In Arena, it behaves exactly as Sunwalker as spells are scarce.