This article is using {{Card template}}.
See Help:Style guide/Card for how to edit this kind of article.
Edit this article
Devouring Swarm
65044 • SW_460
Regular 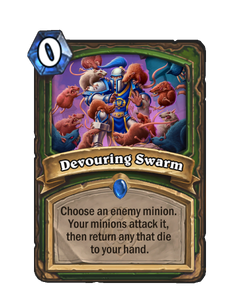 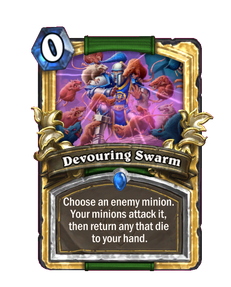 Click here for full resolution image
Choose an enemy minion. Your minions attack it, then return any that die to your hand.
Flavor text

Devouring Swarm is a rare hunter spell card, from the United in Stormwind set.

Devouring Swarm can be obtained by:

Devouring Swarm is a no mana cost spell that can be used to target specific enemy minions and get rid of them without playing around against enemy Taunts.

It has synergies with minions like Knuckles, Trampling Rhino that can indirectly attack enemies.

Similar to The Beast Within, you should attack with your minions and then play Devouring Swarm as it will allow all of your minions to attack a second time.