This article is using {{Card template}}.
See Help:Style guide/Card for how to edit this kind of article.
Edit this article
Devolve
40694 • CFM_696
Regular 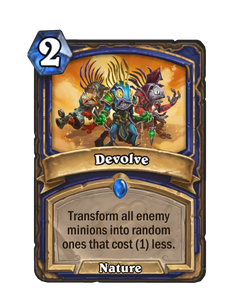 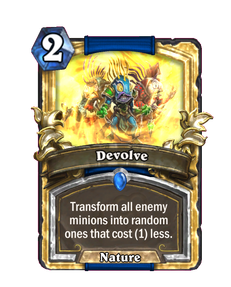 Ragnaros looked down. He looked like some kind of War Golem. "WHAT HAVE YOU DONE TO ME," he yelled. But all that came out was a deep grinding sound. He began to cry. 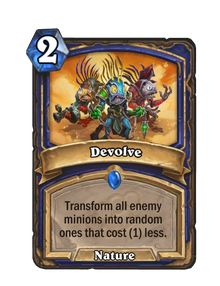 Devolve is a rare shaman spell card, from the Mean Streets of Gadgetzan set.

This card acts as a board-wide transform effect for your opponent and can be used best to get rid of key cards without any adverse effects, weakening their board in the process.

Devolve is good at dealing with buffed minions of all kinds. It's especially effective against buffs that are reusable like Val'anyr and Libram of Wisdom, since the opponent won't get them back. It's also good at neutralizing Deathrattle minions. Devolve is particularly handy against resurrection effects, since if the minion they want destroyed is transformed, it adds the minion that it's transformed to into the dead minion pool instead of the one they wanted. This includes similar effects like Doomcaller shuffling in a new C'thun.

There are some downsides involved with Devolve. Due to its randomness, it's very possible you might give the opponent better minions than they have now. This is more likely against higher cost minions that lower ones. You may also give them a Taunt minion and make your trades worse.

This is a great counter against Living Mana which can make the enemy effectively lose up to 7 Mana Crystals since their Living Mana deathrattles will disappear.

The opposite of Evolve, this card seemingly represents a spell that causes targets to "devolve" into more primitive lifeforms. The card art appears to depict the three crime bosses of Gadgetzan — Don Han'Cho (left), Aya Blackpaw (center) and Kazakus (right) — being transformed into murlocs.