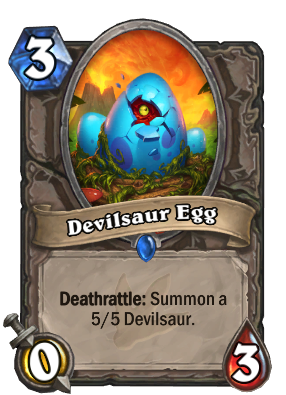 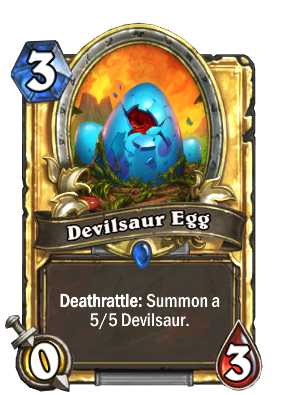 A key ingredient in all discerning Funnel Cake recipes.

Devilsaur Egg is a rare neutral minion card, from the Journey to Un'Goro set.

Devilsaur Egg can be obtained through Journey to Un'Goro card packs, or through crafting. 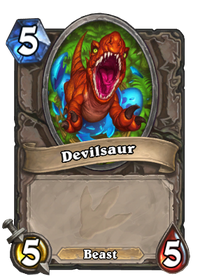 This minion acts as a more powerful but harder to activate Nerubian Egg. Like Nerubian Egg, your opponent will most likely avoid attacking this minion. You can instead force them to using cards that grant the egg Taunt, such as Defender of Argus or Mark of the Wild. You can also use enchantments that give it attack, in order to activate the deathrattle yourself.

You can use Terrorscale Stalker or Spiritsinger Umbra to trigger the deathrattle without having the Egg killed.

Devilsaurs are huge, theropod dinosaurs found in small numbers only in Un'Goro Crater, Eco-Dome Farfield in Netherstorm, Drak'Tharon Keep, Sholazar Basin and several islands in the South Seas including the Isle of Giants.

Devilsaurs are among the largest predators to ever walk Azeroth. While most died out long ago, some thrive in isolated pockets to this day. There is much speculation about the purpose of the devilsaur's degenerate front arms. One theory is that they help devilsaurs rise to a standing position; another theory suggests that the arms titillate females. More observation is necessary.