This article is using {{Card template}}.
See Help:Style guide/Card for how to edit this kind of article.
Edit this article
Despicable Dreadlord
42743 • ICC_075
Regular 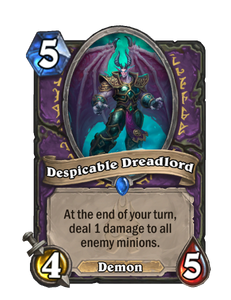 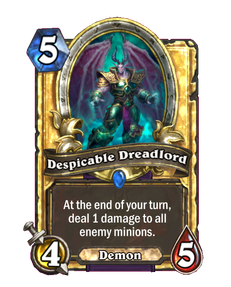 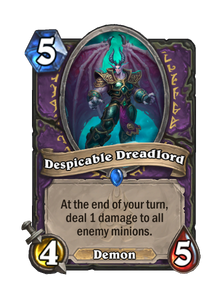 Despicable Dreadlord is a rare warlock minion card, from the Knights of the Frozen Throne set.

Despicable Dreadlord is useful to clear low cost/low health minions very easily. In some cases, you can simply leave a enemy minion's health at 1 and use the rest of your minions to attacking the enemy hero, and use the Dreadlord to destroy it.

Playing two Despicable Dreadlord allows you to deal 2 damage at the end of each turn, which is much more effective.

Should this minion not be killed, it can produce havoc to decks that have a lot of low mana cost minions such as Zoolock and Pirate Warrior. It is especially effective as a tech card against aggressive paladin decks.

However, it can go wrong if the opponent has cards with effects that trigger when they take damage, such as Acolyte of Pain and Frothing Berserker.

Nathrezim (called dread lords or dreadlords in the Common tongue) are intelligent and cunning demons who usually act as intelligence agents, interrogators and emissaries for the fiery lords of the Legion, notably Kil'jaeden, as well as tacticians and lieutenants upon the field of battle in time of war. While they are powerful foes on the battlefield, they prefer to turn nations against each other through manipulation and guile. The nathrezim are merciless villains who feed upon the energies of mortal creatures. They utilize terror and subterfuge - often turning brother against brother as whole worlds fall before their dark influence. They are known to be extremely manipulative and masters of trickery; they sometimes refer to themselves as thal'kituun in their language, meaning "the unseen guests".

They were originally created by Sire Denathrius within Sinfall in Revendreth after creating the original venthyr Court of Harvesters, created from the will of Denathrius, and were assumed banished and exiled by Denathrius for their actions and treachery that led to the invasion of the Light within the Ember Ward. Prince Renathal considers them more his brothers due to the nature of their creation than his own fellow venthyr, who are created from mortal souls, and hoped they would return to Revendreth penitent and as family.

During the Third War, some of them served as The Lich King's jailors, on the behest of Kil'jaeden, and commanded the Plague of Undeath and the Scourge that swept through Lordaeron.