This article is using {{Card template}}.
See Help:Style guide/Card for how to edit this kind of article.
Edit this article
Desert Camel
2892 • LOE_020
Regular 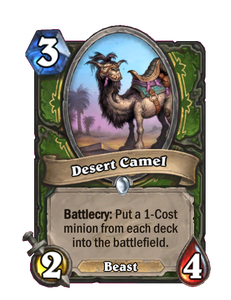 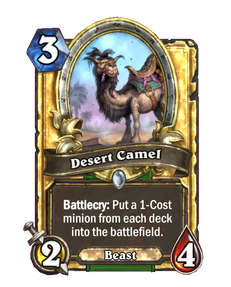 Dang. This card is sweet. Almost as sweet as Dessert Camel. 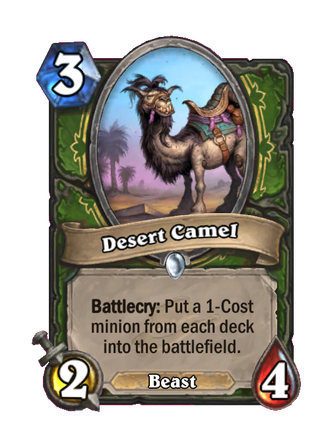 Desert Camel is a common hunter minion card, from the League of Explorers set.

By controlling how many and which 1-cost minions the player has in their deck, they can guarantee the outcome of their Desert Camel's Battlecry.

Injured Kvaldir is an excellent minion to put in your deck to be chosen by this card, as its negative Battlecry will not be activated.

Also you could put an opponent's minion such as

Zombie Chow into play and destroy it to gain 5 Heath, or perhaps prevent an enemy minion's Battlecry from being activated, such as

This card is effective against decks which have no 1-cost minions. The downside may also be reduce if you have area of effect removal like

Powershot that is fairly likely to remove the opponent's 1-cost minion anyway.

The Desert Camel is ridden by two minions - one from each hero's forces - which upon the camel's arrival on the battlefield "hop off" and spring into action.[2]

Camels are a type of herbivore mammals native to Uldum. They were introduced in World of Warcraft: Cataclysm.