This article is using {{Card template}}.
See Help:Style guide/Card for how to edit this kind of article.
Edit this article
Demonwrath
2301 • BRM_005
Regular 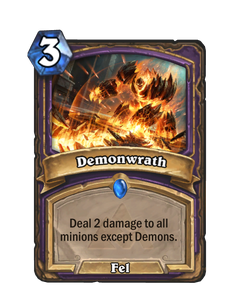 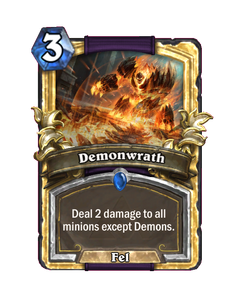 Demons are not angry most of the time. You have to play this card in order to really bring it out of them. 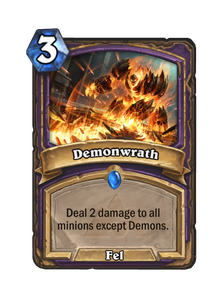 Demonwrath is a rare warlock spell card, from the Blackrock Mountain set.

Demonwrath is clearly designed as a strong early-game AoE removal option for Demon-oriented warlock decks, such as Demonlock. For 3 mana, it provides an extremely useful addition to the warlock's usual arsenal of AoE effects, but requires a friendly board of mostly or entirely Demons in order for its benefits to outweigh its drawbacks. With a minion roster composed primarily or exclusively of Demons, Demonwrath is a cheap and versatile removal tool, especially against aggro decks relying on swarms of smaller minions.

Using Demonwrath doesn't necessarily require a demon-heavy deck. With an empty board, it functions as a cheaper Consecration, and it doesn't damage yourself like Hellfire, making it an effective board clear for decks that use few minions. Demonwrath's damage can be easily augmented using Spell Damage minions such as Bloodmage Thalnos or Azure Drake. Even if the minion is destroyed by Demonwrath, their Spell Damage will still add to the spell's output. In addition to its use as AoE board clear, Demonwrath can be useful for triggering "egg" cards like Nerubian Egg. However, its Demon-synergy prevents it from being used to trigger Imp Gang Boss' effect.

Demonwrath can also fall flat if you find yourself in a mirror match against another Demon-based warlock or demon hunter deck, especially if it's an aggressive early-game deck.