This article is using {{Card template}}.
See Help:Style guide/Card for how to edit this kind of article.
Edit this article
Demonic Project
50432 • BOT_913
Regular 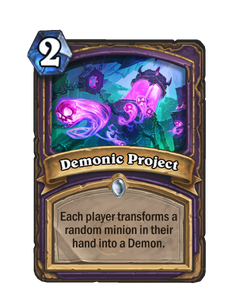 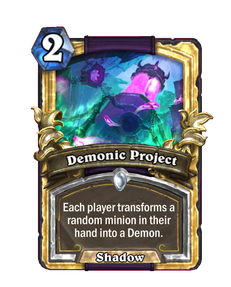 Dimensions: Full • 330 x 410px
Each player transforms a random minion in their hand into a Demon.
Flavor text

Another group project where Jaraxxus doesn't do any work. 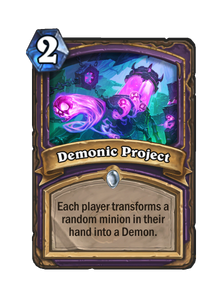 Demonic Project is a common warlock minion card, from The Boomsday Project set.

Demonic Project main use is to disrupt Combo deck strategies similar to Dirty Rat by replacing key components with Demons. Against non-Warlock decks, the minion granted is also unlikely to have synergy with the opponent's deck. However, the random nature of this Spell means that you can still fail to remove a key card if the opponent is holding sufficient minions. If you have strong, desirable minions in your hand, you also run the risk of transforming a good card into a less desirable replacement although it can replace a Tech card that are essentially useless in that particular matchup such as Skulking Geist or Kezan Mystic to a more usable Demon card.

Due to the above, timing is important when playing this Spell. You can play this Spell when you have no minions in your hand, or a few minions which you don't mind transforming. Scenarios where your opponent has thinned their deck considerably are good opportunities to play this Spell, as it is likely they have at least a few vital components in the hand, increasing the likelihood of nullifying key cards such as Malygos , Mecha'Thun, and Questline final reward minions.