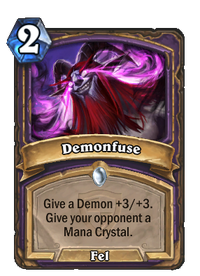 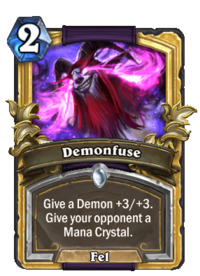 Give a Demon +3/+3. Give your opponent a Mana Crystal.
Flavor text

Very dangerous when attached to a demonbomb.

Demonfuse is a common warlock spell card, from the Grand Tournament set.

Demonfuse can be obtained through The Grand Tournament card packs, or through crafting.

This is a hard to use Demon buff card, similar to Demonheart and Demonfire. The buff itself is a tempo increase (+3/+3 for 2 mana), however the card's secondary effect makes this an overall tempo loss since for the remainder of the early game your opponent will have one more mana than you. Best use is not for the early game (the earlier you play this the more advantage you give to your opponent) but as a mid-late game push for burst damage for a tempo demon warlock deck; however, this purpose can just as easily be fulfilled by a burst damage spell like Darkbomb or Soulfire, which do not have downsides that make them undesirable to play earlier in the game.