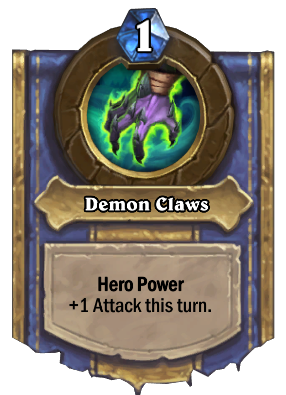 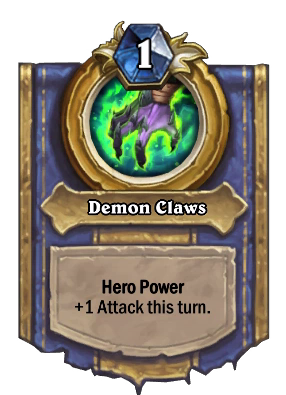 Demon Claws makes Demon Hunters perfect for finishing off enemies with 1 health. The lowered mana cost will make this even easier, weaving hero attacks between plays that mostly fit the mana curve. The hero power can also be used to supplement weapons, such as the cleaving effect of Flamereaper or gaining extra life from Aldrachi Warblades. Demon Hunters can also boost their attacks with dedicated cards, including Chaos Strike.

A number of Demon Hunter minions synergize with hero attacks, further improving the hero power. Battlefiend and Satyr Overseer both provide bonuses after attacking, which can be accomplished in a pinch for only 1 mana.

The Demon Hunter hero power went through major iterations throughout development. Its original effect on the first pitch was "Deal 2 damage, take 2 damage", which ended up being too powerful in the early game, similar to Pain Split, one of the hero powers of Tekahn in The Dalaran Heist.

The second idea for the hero power tied into an entire scrapped mechanic for the Demon Hunter. The second iteration, at the time named Demon's Bite, gave +1 Attack for 2 mana, and attacking generated Fury. Fury was a special secondary resource stored alongside mana, which was generated by the hero power and other Demon Hunter cards, and had to be spent to play certain cards. The devs moved away from this design due to UI issues and design space restrictions.

The third version was called Fel Rush, and granted +1 Attack and allowed the hero to bypass Taunt for the turn. This effect sounded exciting in principle, but in actuality was not very useful in most situations, leaving the ability underpowered compared to what other hero powers did. The ability was moved on to the legendary Kayn Sunfury instead.

The fourth iteration was called Twin Blades, and granted +1 Attack for 2 mana and could be used twice per turn. This version specifically referenced the iconic twin warglaives that Demon Hunters wield. According to Chadd Nervig, this version of the hero power was fairly flexible, being "usually +1 Attack, sometimes +2 when you want to spend the extra mana". However, this version did have some concerns. For example, it wasn't clear to newer players that the hero power wouldn't let them attack twice, and that both uses had to be done at the same time. It was also still too weak compared to the other hero powers.

The final version was decided only 3 months before Demon Hunter's announcement. The team had the idea of a 1 mana hero power early on, but scrapped it for fear of both breaking symmetry with the other hero powers and worrying the halved cost was too powerful. However, they ultimately decided to try it, and ended up really liking the design.[1]