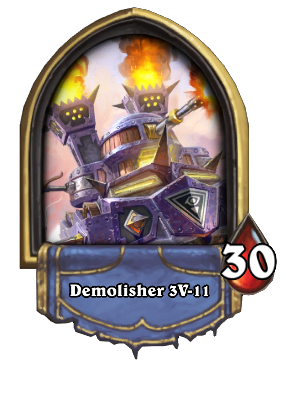 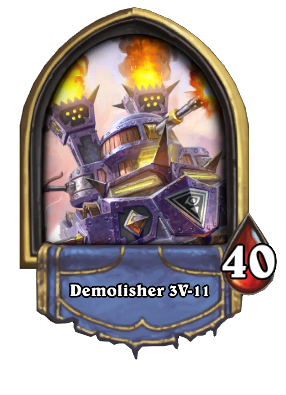 Rafaam got a great deal on one of these at a Horde surplus auction.

Demolisher 3V-11 is a boss that can be encountered initially in Chapter 2 of Tombs of Terror. After completing Chapter 2, this boss encounter will be available in any completed chapter.

Destroyer 3V-11 has a relatively tempo deck based on the mech synergy. Like any other mech deck, this one contains several cards that reduce mechs' cost, and Magnetic synergy in Heroic mode that often can be very dangerous. Therefore, the best passives that allow to outrun the enemy's tempo are Glyph of Warding, Rocket Backpacks, Scepter of Summoning, VIP Membership and also Crook and Flail or Lucky Spade, if the deck is well built around them.

In Normal mode it's a hybrid of mechs and armor, as well as a small direct damage through numerous Demolishers. To win at this difficulty it's enough to kill every enemy minion and not give Destroyer 3V-11 a lot of armor to minimize the consequences of Shield Slam, Heavy Metal! and Reckless Flurry. Since the minions of Destroyer 3V-11 do not pose a serious threat (they will almost never be able to immediately kill the player's minions) in Normal mode, it's quite easy to complete these objectives.

Mechs of Destroyer 3V-11 in Heroic mode are much stronger and useful. Now the boss has not only more tempo minions that can capture the desk in contrast to the Normal mode, but also a lot of Magnetic cards. In this regard, killing of enemy mechs becomes a prerequisite for victory, otherwise the player won't have enough resources to survive their damage. In general, heroic encounter has a significant resemblance to Mech Paladin and the best tools for fighting against this deck are suitable for this boss battle. It is any removals, Silence, powerful AoE like Mass Hysteria / Flamestrike / Plague of Death. Such treasures as Addarah, Scales of Justice, Karl the Lost, Sack of Lamps and Runaway Gyrocopter will show themselves perfectly.

Reno Jackson
You didn't tell me there'd be TANKS, Elise! This is awesome!

Demolisher 3V-11 is unique to Hearthstone. It belongs to League of E.V.I.L.