This article is using {{Card template}}.
See Help:Style guide/Card for how to edit this kind of article.
Edit this article
Demolisher
979 • EX1_102
Regular 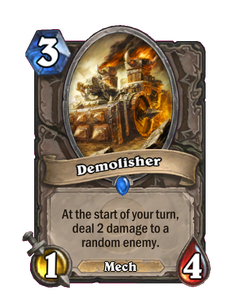 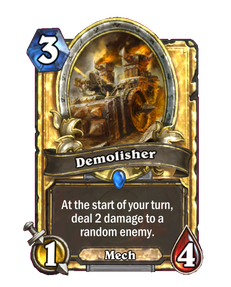 Laying siege isn't fun for anyone. It's not even all that effective, now that everyone has a flying mount. 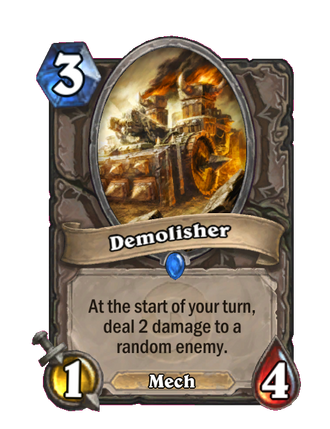 Demolisher is a rare neutral minion card, inducted into the Legacy set, formerly from the Classic set. 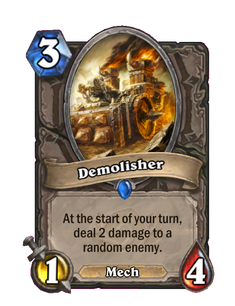 Demolisher is a card with a powerful effect if left in play unchecked. Its ability can target minions and heroes alike giving it a steady stream of damage output. The random nature of the card means that you cannot influence what it hits other than by eliminating possible targets. Despite its random nature, applying 2 damage to almost any enemy minion or hero is a valuable asset and as a result will quickly be targeted by minions unless protected with Taunt minions. Even then the Demolisher will be a likely target for removal spells or Silences.

The orcish demolisher is a phlogiston-powered replacement for the formerly used orcish catapults which were replaced after the Third War. It is a standing asset to the Horde. Capable of hurling fiery projectiles over great distances, orcish demolishers have been the doom of many Alliance regiments. Though a small team of orcs must always be available to man these destructive machines, unerringly demolishers serve as the Horde's greatest siege weapon. Unlike catapults, demolishers can be equipped with burning oil which smothers their projectiles in napalm and thus setting the ground ablaze wherever they land.

Despite theoretically being an improvement over the catapult, there were no demolishers in World of Warcraft until WotLK, although catapults were (and still are) quite common.