This article is using {{Card template}}.
See Help:Style guide/Card for how to edit this kind of article.
Edit this article
Demented Frostcaller
38412 • OG_085
Regular 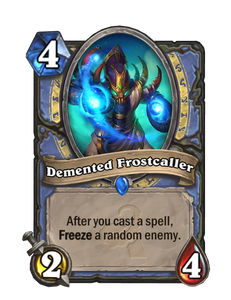 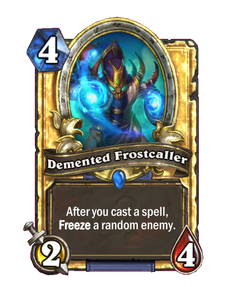 He prefers that you refer to him by his nickname: 'Frostwaker.' 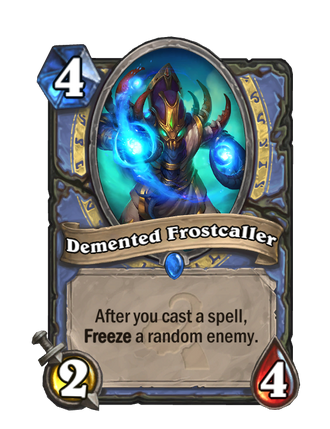 Demented Frostcaller is a rare mage minion card, from the Whispers of the Old Gods set.

Demented Frostcaller works well with Freeze decks, or with decks running lots of cheap spells. A possible combo would be to use

Ice Lance on the Frozen enemy, causing the Frostcaller to Freeze a second enemy. However, since its effect is randomized, it may end up Freezing the enemy hero even if they have no weapon, or a minion with little or no Attack, wasting the effect. On the other hand, it can also Freeze Stealthed minions that can’t be directly targeted, delaying their chance to attack.

To use Demented Frostcaller effectively, the ideal time to play it is early in the game where there are few or no enemy minions on the board, or later in the game with multiple enemy minions, if you can immediately follow up with a few spells. Be prepared that unless you can cast as many spells as there are enemies, you might not succeeed in getting the ideal target Frozen.