This article is using {{Card template}}.
See Help:Style guide/Card for how to edit this kind of article.
Edit this article
Defias Ringleader
201 • EX1_131
Regular 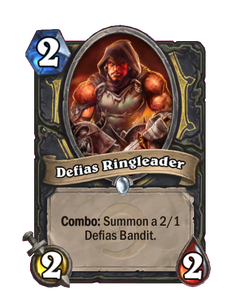 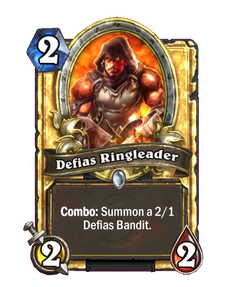 He stole the deed to town years ago, so technically the town is his. He just calls people Scrub to be mean. 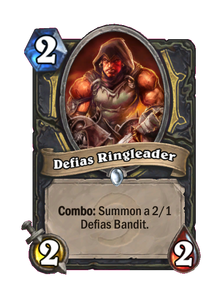 Defias Ringleader is a common rogue minion card, inducted into the Legacy set, formerly from the Classic set. 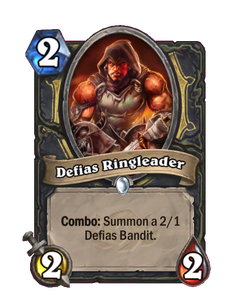 The Defias Ringleader and his Defias Bandits are an infamous early-game play for many rogue decks. While their low Health provides minimal resistance to removal, they can offer a decent amount of damage output if left unchecked.

However, if the rogue does not make use of the Combo effect, this card produces only a very lackluster 2/2 for 2 mana. Cheap spells such as Backstab and Deadly Poison, or other low-cost minions are vital in activating the Combo effect.

By using The Coin, a player can activate the card's Combo ability and summon both the Ringleader and Bandit on turn 1.

Another trick is to use a return to hand effect such as Youthful Brewmaster's Battlecry to return the Ringleader to the hand, allowing multiple Bandits in total to be summoned through the one Ringleader. In theory, a rogue with The Coin and 2 x Shadowstep could use all four cards to play the Ringleader three times on turn 1, resulting in a 2/2 Ringleader and three 2/1 Bandits on the board at the end of their first turn. This type of play can provide a very powerful start to the game, but also risks failure at the hands of early removal such as Arcane Explosion.

Summon
This is our town, scrub.

Attack
You lookin' at me?

Defias Ringleaders are the lower leadership within the Defias Brotherhood, a group of bloodthirsty rogues based in Westfall. The Brotherhood was originally led by Edwin VanCleef.

The Defias Brotherhood is a group of assassins, thieves, and pirates that seeks to overthrow the Kingdom of Stormwind. They are based primary in Westfall, an area not easily protected by the Stormwind Army.

It is possible that the town referred to in the card's summon quote is Moonbrook, which was Defias-controlled prior to Edwin VanCleef's defeat.