This article is using {{Card template}}.
See Help:Style guide/Card for how to edit this kind of article.
Edit this article
Defias Cleaner
40745 • CFM_855
Regular 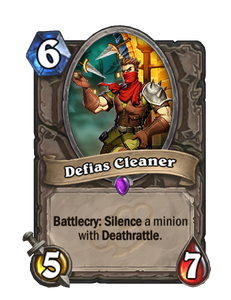 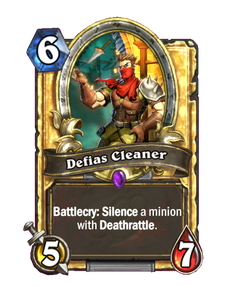 His house cleaning service is quite thorough. Not a spot to be found... or any of your stuff! 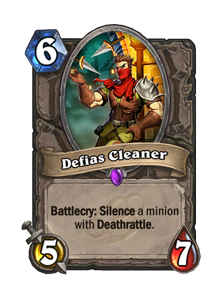 Defias Cleaner is an epic neutral minion card, from the Mean Streets of Gadgetzan set.

In Arena, this card is a solid pick that counters common Arena picks like Infested Tauren.

This "cleaner" belongs to the Defias Brotherhood, a group of bloodthirsty rogues based in Westfall. The Brotherhood was originally led by Edwin VanCleef.

The Defias Brotherhood is a group of assassins, thieves, and pirates that seeks to overthrow the Kingdom of Stormwind. They are based primary in Westfall, an area not easily protected by the Stormwind Army.

The title of "cleaner" in this case refers to a criminal whose job it is to cover up the signs of a crime that has been committed, such as removing evidence and disposing of bodies. Although given this particular Cleaner's chosen tools, his duties may even extend to "cleaning up" unwanted witnesses.