This article is using {{Card template}}.
See Help:Style guide/Card for how to edit this kind of article.
Edit this article
Defender of Argus
763 • EX1_093
Regular 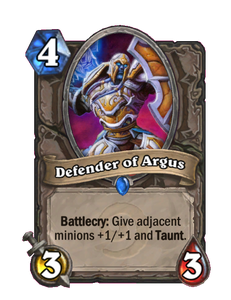 You wouldn’t think that Argus would need this much defending. But it does. 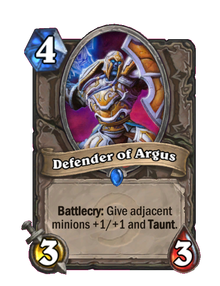 Defender of Argus is a rare neutral minion card, inducted into the Legacy set, formerly from the Classic set. 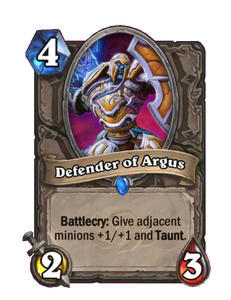 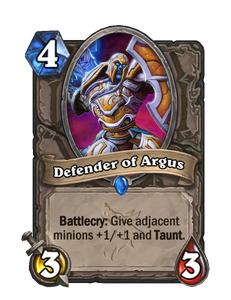 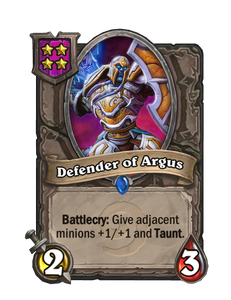 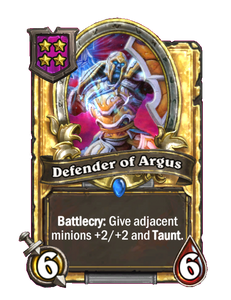 Two copies of regular Defender of Argus are obtained for raising sum of all your class levels to 26.

Two copies of golden Defender of Argus (Core) are obtained for winning 1000 games across all classes.

Defender of Argus (Core) is uncraftable and cannot be crafted or disenchanted.

While the Defender of Argus has poor stats for its cost, the powerful Battlecry more than makes up for this by reshaping the board upon play. Extra points in Attack are always welcome, but creating a double defence from enemy attack will force your opponent to re-assess their strategy. This is especially effective against aggro decks, which will have to sacrifice additional cards and minions to break through the Taunt.

Note that if the Defender of Argus gives Taunt to a minion in Stealth, the Taunt ability will only become active once the minion has left Stealth.

The Defender of Argus is based on members of the draenei organization the Hand of Argus, first encountered in the Burning Crusade expansion for World of Warcraft.

The Hand of Argus is an organization of draenei paladins and vindicators that serve as the primary military and police force of the Exodar. Their presence is strongest in Bloodmyst Isle, where the greatest of the corruption on the Azuremyst Isles has taken hold.

The Hand of Argus is led by the Triumvirate of the Hand — Vindicators Boros, Kuros and Aesom. They are stationed in Blood Watch on Bloodmyst Isle. However, despite remaining mostly on Bloodmyst Isle, the Hand's agents have been seen in Ashenvale and Nagrand.