Hearthstone Wiki
Register
Don't have an account?
Sign In
Advertisement
in: Cards, Card data, All cards,
and 7 more 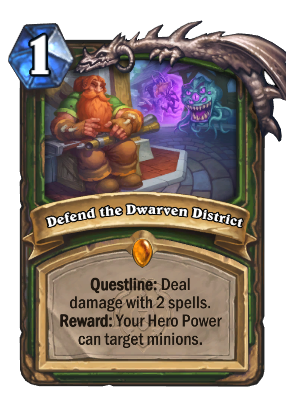 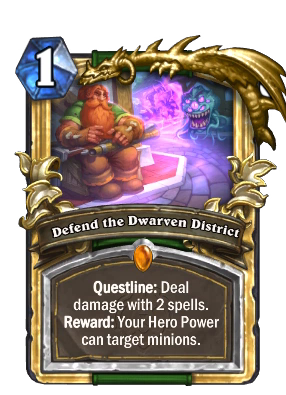 Don't shoot until you see the purples of their eyes.

Defend the Dwarven District is a legendary hunter spell card, from the United in Stormwind set. 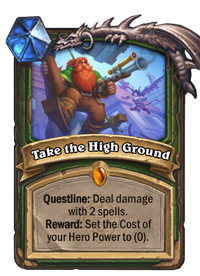 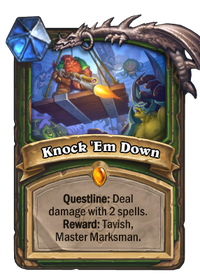 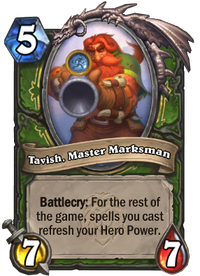 This questline aims to turn the Hunter's hero power from pure face-damage into a strong board-control tool due to being able to freely target enemy minions. Once complete, Tavish allows for a huge amount of burst damage by playing a lot of cheap spells, similar to the Shadowreaper Anduin-Raza the Chained combination. The turn after Tavish is played, the Hunter will ideally be able to burst down the enemy hero with lots of cheap hero power casts. Minions that are syngestic will cheap spells like Kolkar Pack Runner can help maintain board control until the quest is complete.

However, despite the intimidating amount of damage this quest is capable of, there are a few downsides. Depending on the opponent, maintaining the board can be a challenge without committing a large amount of resources. In addition, if an opponent does not play too many minions, it can be harder to complete the questline steps since some hunter spells can only target minions. Prior to completing the questline, this deck also struggles to deal with large taunt minions without using Deadly Shot.

The Dwarven District lies in the northern corner of Stormwind City. Here, the dwarves of Ironforge have established an enclave. The forges in the district produce a constant haze, supplemented by the constant strokes of smiths' hammers. Hunters will find a place to stay within the Hunter's Guild, located in this area. Profession trainers for mining,blacksmithing, and engineering, and corresponding forges and anvils can also be found here. The Stormwind City end of the Deeprun Tram line is accessible through a tunnel on the east side of the district.

This card's art depicts Tavish trying to protect the district from the demon army, led by Tamsin.