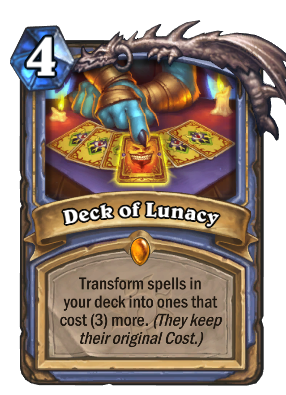 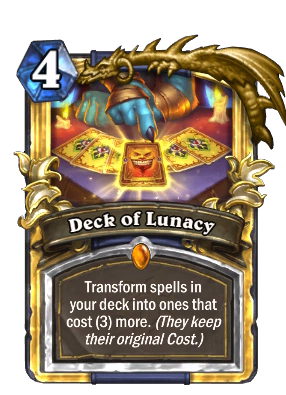 Uncollectible
Transform spells in your deck into ones that cost (3) more. (They keep their original Cost.)
Flavor text

Deck of Lunacy is a legendary mage spell card, from the Madness at the Darkmoon Faire set.

Deck of Lunacy can be obtained through Madness at the Darkmoon Faire card packs, through crafting, or as an Arena reward.

Deck of Lunacy is a powerful card when played early. In order to take advantage of its effect, it is a good idea to have as many spells in your deck as possible, since many spells upgraded by the Deck of Lunacy will summon minions themselves. Playing Deck of Lunacy followed by Incanter's Flow can be a great source of cheap but extremely powerful spells.

During early game, be sure to play it as soon as it's drawn, even if it's at the cost of losing tempo or sustaining some damage or both. It will soon redeem itself over the coming turns and give you an overall advantage.

While it can be devastating for your opponent if you find Deck of Lunacy in hand during mulligan or in early game, your deck should be competitive in itself as there can be a good possibility that you end up not drawing it and thereby losing the game.

In the Year of the Gryphon, the consistency and predictability of generated spells has greatly improved in Standard with all the Year of the Dragon spells, as well as many of the weaker spells from the Classic set, rotating out. This resulted in Deck of Lunacy giving powerful spells like Skull of Gul'dan, Libram of Hope and Nagrand Slam far more often, and it was suddenly thrust into prominence in the meta in the first two weeks of Forged in the Barrens. Following this, it was nerfed to cost 4 mana, up from 2, making it a greater tempo loss while preventing it from being played too early.

The Lunacy Deck is a deck of Darkmoon Cards that can be crafted by combining the Ace through Eight of Lunacy. Handing it in to the Darkmoon Faire awards Darkmoon Card: Madness trinket. The Madness card is also depicted on this card's art.