This article is using {{Card template}}.
See Help:Style guide/Card for how to edit this kind of article.
Edit this article
Deathwing, Mad Aspect
55007 • DRG_026
Regular 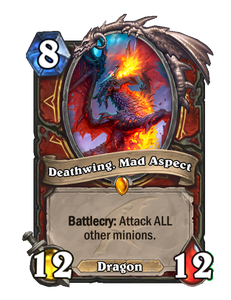 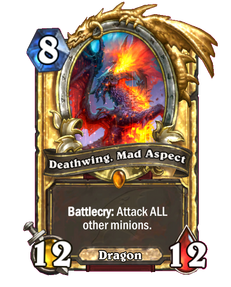 Bite that one, bite that other one, claw this one, swallow that one whole.... 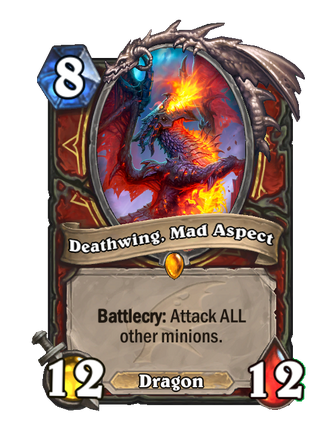 Deathwing, Mad Aspect is a legendary warrior minion card, from the Descent of Dragons set.

Deathwing, Mad Aspect is a powerful minion with enough stats to clean out the entire board of mid to low-stat minions. While he can take out most minions due to his very high Attack, dealing with multiple higher level threats will often leave him critically injured or dead before he finishes. However, since his method of clearing the board involves attacking, Divine Shield and Reborn minions are protected from his attacks, high-attack minions will ensure he does not survive the next turn, and a Poisonous minion can bring his rampage to a premature end. Keep in mind that Deathwing, Mad Aspect will also attack allies as well, so unless you're prepared for Deathwing to kill your entire board (or if you have no board presence), be very cautious when playing him.

Commanding Shout may also be used to keep Deathwing, Mad Aspect and your board of minions alive, although they can easily be removed by Mage's

The Boom Reaver or

Woecleaver, but it's just as effective as cheating out Deathwing's other counterparts since they have the same statline, with the latter having a powerful Deathrattle, however Mad Aspect’s powerful battlecry should still be considered, as it makes it a less painful draw, especially in less dragon centered decks.

This card likely represents Madness of Deathwing, the Destroyer's last stand in the Maelstrom and the final boss of World of Warcraft: Cataclysm.

A warped mass of molten hatred and unfathomable power, this formless, mindless horror cannot be stopped. Whatever was left of Neltharion the Earth-Warder is long gone, his mind and soul corrupted and devoured by his Old God masters. All this monstrous being desires is destruction, annihilation, and the end of all things.