Hearthstone Wiki
Register
Don't have an account?
Sign In
Advertisement
in: All cards, Wild format cards, Orcs,
and 2 more

This article is using {{Card template}}.
See Help:Style guide/Card for how to edit this kind of article.
Edit this article
Deathstalker Rexxar
43398 • ICC_828
Regular 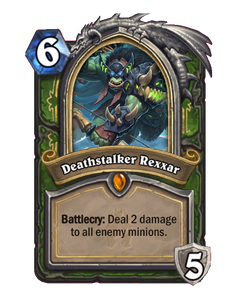 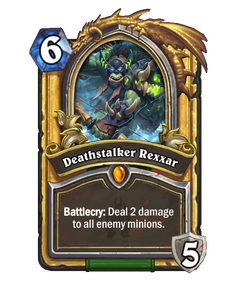 "You were too slow, old friend. The hunt began long ago. And now... it will never end." 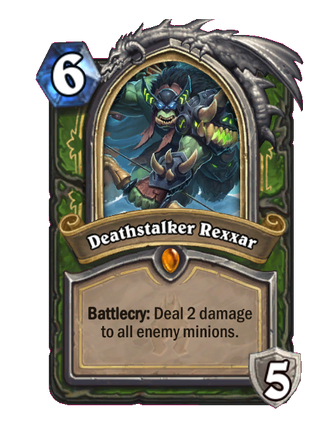 Deathstalker Rexxar is a legendary hunter hero card, from the Knights of the Frozen Throne set.

Like all other death knight hero cards, Deathstalker Rexxar is 1 of the 9 possible hero card rewards for completing the prologue of the Icecrown singleplayer adventure. 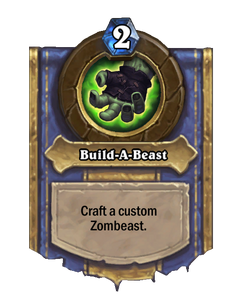 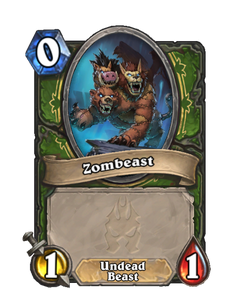 Upon activating Deathstalker Rexxar, you immediately deal 2 damage to all enemy minions. This allows this card to be used in a more control-based Hunter deck, clearing the enemy's field while preparing to dominate with your Zombeasts. You are also provided with 5 armor, giving you an additional defensive boost to help turn the tides.

The main reason to use Deathstalker Rexxar though is, of course, his Hero Power, Build-a-Beast. 2 Mana for a "draw" is already a very strong effect (stronger than

Life Tap with its 2 Health cost), but rather than a random card, you're molding a powerful minion.

Try to create synergies with the effects provided. Poisonous can be an extremely strong keyword when combined with Charge, Rush, or damage dealing effects. Lifesteal synergizes fantastically with beasts with Taunt, as well as beasts that have damaging effects such as

As a rule of thumb, Zombeasts are often stronger than the sum of their parts. For example, a

Crackling Razormaw stitched with a

River Crocolisk will result in a 4 Mana minion with a powerful effect and a 5/5 statline, which for 4 Mana is far above the standard power curve. While building minions with powerful synergy is preferred, any Zombeast is usually more than worth the cost of summoning.

While Zombeasts can be undoubtedly powerful, there are times when you should not even play Deathstalker Rexxar, namely when your opponent's almost dead. Losing

Steady Shot considerably lowers their reach, and Hunters can find themselves being unable to land the killing blow. When having a healthy early to mid-game lead, especially against classes and decks that lack healing or Taunts or have many high-value minions and removal, being able to chip down the last of their Health with Steady Shot is better than trying to out-value your opponent with Zombeasts. Avoid playing Deathstalker Rexxar in these cases, unless you absolutely need the Battlecry to survive.

Summon
The eternal hunt has begun.[10]

When Rexxar’s hunt came to a premature end, he was resurrected as Deathstalker Rexxar. When played, Deathstalker Rexxar fires a flurry of arrows—dealing 2 damage to all enemy minions—and replaces your hero, granting 5 armor and changing your Hero Power to Build-a-Beast.

Build-a-Beast allows Deathstalker Rexxar to stitch together a horrifying new Zombeast by ‘Discovering’ pieces of two former animal friends. The new creation combines all the stats of both creatures he’s sewn together; mana cost, attack, health, and card text. The beastly abomination is then added to Deathstalker Rexxar’s hand to later be unleashed on a hapless foe.

Terrifying indeed! Of course, there are many other threats to found within the Scourge.[3]

Deathstalker Rexxar is the death knight version of

Pompous Thespian tells a cautionary tale about Rexxar, who one day discovered that a great evil had descended on his forest home — the air was frigid, and the forests and everything that walked within them were dying. This corruption was revealed to be the result of the druid

Malfurion Stormrage, who had become pestilent, a corruptor of nature commanding legions of bugs. Rexxar fired his bow at the corrupt druid, but the insects chewed apart his arrows and poisoned his companions,

Huffer. With sorrow in his heart, the hunter swore he would do anything for the power to do what was right. Suddenly, the shadow of a twisted throne fell over him, but in its place was only the stranger

Gul'dan, who had just what Rexxar wished for. All that the warlock asked in return was a single life. Rexxar accepted, and was resurrected as Deathstalker Rexxar. He was taught by Gul'dan how to grant his beloved animals immortality and unholy power. The thespian's tale is interrupted when the audience members begin suggesting that Rexxar used his powers to stitch together various animals into horrifying Zombeasts. Although the thespian tells the listeners to not get carried away, he is swayed by the donations of gold coins and continues by telling how the most fearsome Zombeast of all was the dreaded "sharkbear". Deathstalker Rexxar and his Zombeasts marched against Malfurion's forces and defeated the corrupt druid, but just as Rexxar moved in for the killing blow, Malfurion revealed that he himself had simply been trying to protect the forests as well before being swayed by the promises of a twisted throne: he and Rexxar had fallen victim to the same force.

The deathstalker's sickly green color scheme and propensity for stitching living creatures together into abominations appear to suggest an association with the Unholy death knight specialization.

"While free from the Lich King’s grasp, some death knights still embody the ever-corrupting nature of the Scourge plague that once threatened to consume Azeroth. No matter their allegiance or cause, they remain defilers of life; and nowhere is their callousness more on display than when threatened. Inflictors of the most aggressive of diseases—and masters of raising unhallowed minions from the ground—these unholy death knights are vicious melee combatants, capable of striking with the force of an undead legion and unleashing pestilence that would bring their foes to ruin."

Four days later, Donais responded with a forum post, in which he agreed with the community, and said there will be change. He said the following: