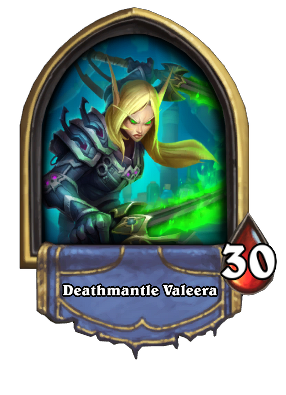 Deathmantle Valeera is an alternate hero for the

Once unlocked and selected for use, Deathmantle Valeera replaces Valeera Sanguinar whenever playing with a Rogue deck, as well as:

When viewed in the collection, Deathmantle Valeera has the following flavor text:

Although rogues are trained in the art of stealth, Valeera's not above getting some extra help from her shadowy armor.
Obtained by completing the Tavern Regular achievement.

Most of Deathmantle Valeera's sounds are the same as Valeera Sanguinar. Unique, different ones are noted as Unique in References section.