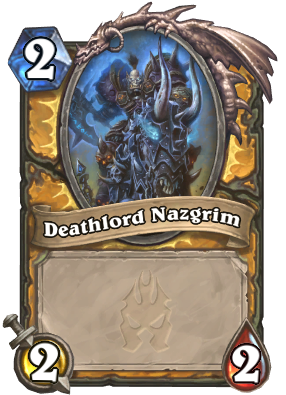 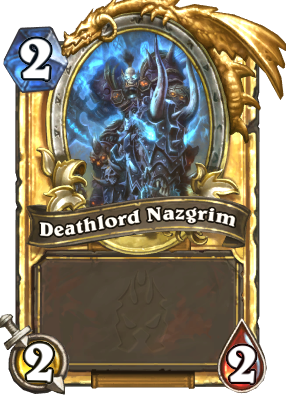 Deathlord Nazgrim is an uncollectible paladin minion, summoned by The Four Horsemen Hero Power, from the Knights of the Frozen Throne set.

For more information, see Uther of the Ebon Blade. 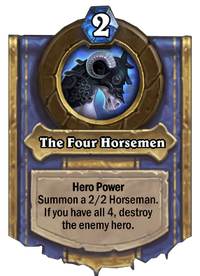 In life, Nazgrim was one of the greatest generals of the Horde. In death, he is a powerful champion of the Ebon Blade. Few, living or dead, can match his might in battle. Nazgrim was a reoccuring orc quest giver and first appeared in the Grizzly Hills as a Sergeant. After the Lich King's defeat, during the Cataclysm, he was promoted to Legionnaire and sent to Vashj'ir. After escaping from the naga there, he was promoted to General and sent to Pandaria.

Upholding his oath to the Warchief, Nazgrim remained loyal to Garrosh Hellscream during the Darkspear Rebellion, and was killed during the Siege of Orgrimmar. During the Burning Legion's third invasion, the Deathlord of the Ebon Blade later brought Nazgrim back into undeath as the first of the new Four Horsemen.