This article is using {{Card template}}.
See Help:Style guide/Card for how to edit this kind of article.
Edit this article
Death's Head Cultist
62744 • BAR_026
Regular 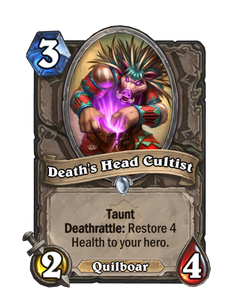 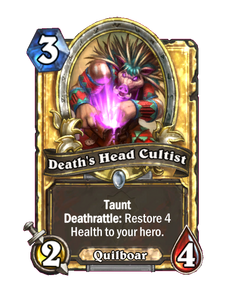 Nothing can stop death. Except a Taunt. With Healing.

Death's Head Cultist is a common neutral minion card, from the Forged in the Barrens set.

Death's Head Cultist can be obtained through Forged in the Barrens card packs, through crafting, or as an Arena reward.

A solid anti-aggro card. In addition to a decent Taunt body, Death's Head Cultist offers a small heal on death.

Deathrattle Demon Hunter can use this card as a target for Razorboar, Razorfen Beastmaster, or Death Speaker Blackthorn.

Death's Head Cultist can be found outside the Razorfen Downs in the Thousand Needles.