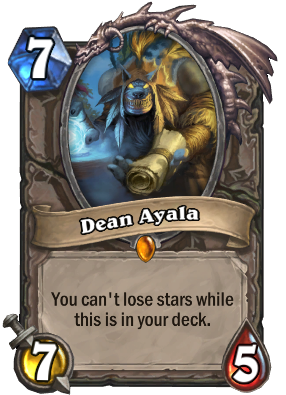 Elite
You can't lose stars while this is in your deck.
External links

As a game designer on Blizzard Entertainment’s Hearthstone team, Dean Ayala is primarily focused on testing and balancing new cards in development. He also contributes to Adventure design, matchmaking, and bug fixing.

Ayala joined Blizzard Entertainment in 2011 as part of the quality assurance team where he supported the development of World of Warcraft, Diablo III, and Hearthstone before making the transition to game design. Dean is passionate about all of Blizzard’s game franchises and has welcomed the opportunity to work on several titles since he joined the company.

Dean is an avid gamer who enjoys playing all types of games, from collectible card games and team brawlers to first-person shooters and MMOs. As a former restaurant consultant, Dean enjoys eating good food and will travel anywhere to find it—especially if it’s good pizza.[4]

Prior to Hearthstone, Ayala had worked as Quality Assurance on StarCraft II: Heart of the Swarm[5] and on Diablo III.[6] When Ayala first heard what type of game Hearthstone (then code-named Pegasus) was, he was "actually a little bit disappointed", thinking "I don't really play card games." However, after taking the game home, Ayala soon began playing it for several hours each night. With no substantial experience with similar games, Ayala describes Hearthstone as "the first collectible card game I'd ever put a lot of time into."[2]

With the first Ranked Season in December 2013, Ayala was surprised to discover he had achieved rank 1 legend, ranking as the top player in the Americas region at that time. After sharing decklists for his current decks on an internal mailing list for Hearthstone players at Blizzard, Ayala was contacted by Mike Donais, at that time the sole member of the final design team, focusing on card balance. Ayala began to help Donais with playtesting, and a few months later on 16th June 2014 officially joined the team.[7][8][6]