This article is using {{Card template}}.
See Help:Style guide/Card for how to edit this kind of article.
Edit this article
Deadscale Knight
42663 • ICC_220
Regular 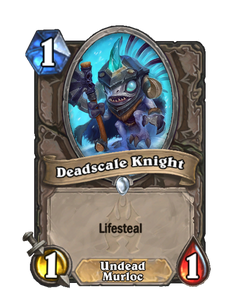 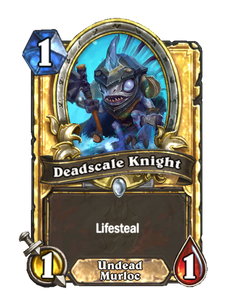 His favorite spell is Chum Explosion. 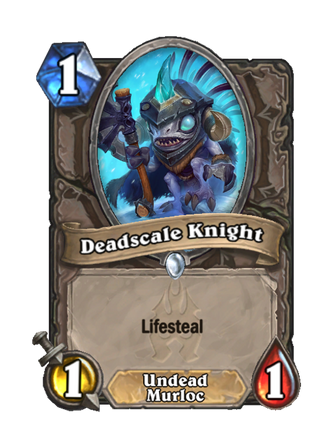 Deadscale Knight is a common neutral minion card, from the Knights of the Frozen Throne set.

Deadscale Knight can be compared to

Voodoo Doctor, which has 1 more Attack and restores 2 Health straight away, while Deadscale Knight has the potential to restore more Health over time if it manages to stick on the board or if its Attack, and thereby its Lifesteal effect, is buffed by cards such as

Murloc Warleader. It can provide a source of healing for Murloc decks, which often lack resources to restore lost Health, but due to its weak stats, Deadscale Knight is unlikely to stay alive for long by itself, with Voodoo Doctor often providing a more direct and efficient alternative.

Deadscale Knight is evidently a murloc death knight, something that has not previously been seen outside of Hearthstone. Undead murlocs, or "mur'ghoul", have previously been known to exist, though the only known group of them consist of members of the Chillmere tribe from the Howling Fjord that have been transformed into the "walking dead" by the Scourge. It's thus possible that the Deadscale Knight may have been originally raised as a mur'ghoul and later equipped and trained in the fashion of a death knight.