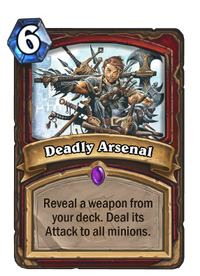 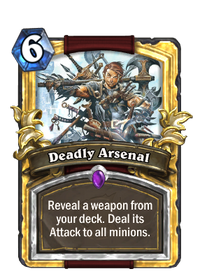 Reveal a weapon from your deck. Deal its Attack to all minions.

Deadly Arsenal is an epic warrior spell card, from the The Witchwood set.

Deadly Arsenal can be obtained through The Witchwood card packs, or through crafting.

Deadly Arsenal can act as a strong board clear if paired with high-attack weapons, such as Gorehowl and Arcanite Reaper. Given the card's high mana cost and warrior's extensive range of board clears, such as Brawl, this card should be used as a last ditch effort. Additionally, you must have a weapon that has not been drawn for this to have any effect. Additionally, this card discourages players from including low-attack weapons like Supercollider and Blood Razor in order to maintain its efficiency, potentially hurting your deck's utility options. Due to these requirements, Deadly Arsenal is rarely an optimal choice for any deck.