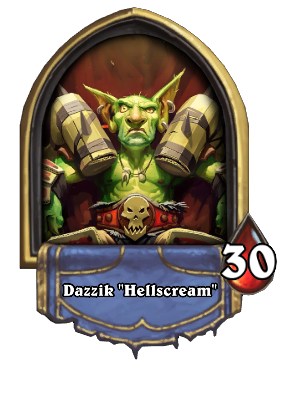 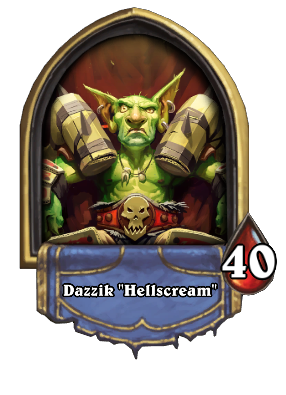 Something about the Warchief seems a little... off.

Dazzik "Hellscream" is a boss that can be encountered in Chapter 4 of The Dalaran Heist adventure. 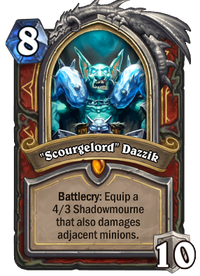 Dazzik runs a control warrior deck. With plenty of weapons and removal from destroying damaged minions, you will need to build a board slowly while playing defensively.

Blastmaster Boom
For the last time, Dazzik! You're not an orc! You're not nearly that cultured.

Dazzik "Hellscream"
I am the Horde's warchief. And as such, I AM the Horde.
Mr. Chu
I find your claims hard to believe.

vs. George the Fallen

Dazzik "Hellscream"
I am the Horde's warchief. And as such, I AM the Horde.
George the Fallen
I don't remember Garrosh being so... green.

Dazzik "Hellscream"
Greetings - Heh. Greetings.
Well Played - Hmph, well played indeed.
Thanks - No no, MY thanks.
Wow - My eyes are upon you.
Oops - That was an error.
Threaten - No! I will CRUSH YOU!

Dazzik "Hellscream"
Break yourself upon my body.
Bring it on!
You're all mine.

I'll show you the power of a true warchief!

Wait a minute, that's MY axe!

Dazzik "Hellscream"
You are beneath my contempt.

"Scourgelord" Dazzik
I will burn this world, and rule its ashes.

Gorehowl will split you in half.

Go. Show them the power of the Horde!

A mere imitation. You don't compare to the real thing.

Oh hey - I was just uh, keeping your seat warm!

You're not the only one with a dark power inside!

Dazzik "Hellscream"
You are beneath my contempt.

Dazzik "Proudmoore" is a goblin vendor dressed like Jaina Proudmoore, found in the Circle of Wills in Dalaran.