This article is using {{Card template}}.
See Help:Style guide/Card for how to edit this kind of article.
Edit this article
Darkshire Librarian
38447 • OG_109
Regular 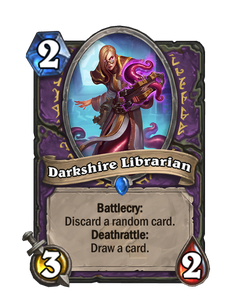 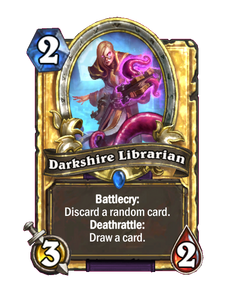 Do NOT be late with your overdue fines. 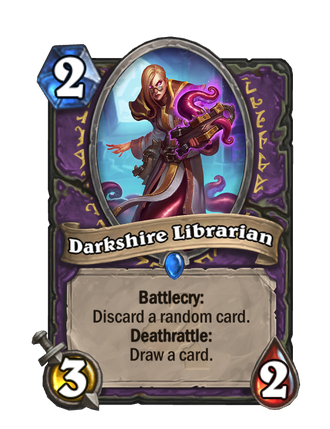 Darkshire Librarian is a rare warlock minion card, from the Whispers of the Old Gods set. 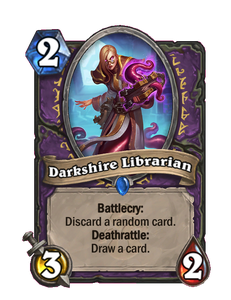 While this card has a strong Deathrattle, the unpredictable nature of its discard effect is a heavy downside, often negating or even outweighing the card draw. It can be turned to the player's advantage though, with discard-related effects like

Malchezaar's Imp. In combination with any of those, this card has a "positive" Battlecry, a positive deathrattle, and is decently statted.

If this card is played while your hand is empty, it is essentially a more powerful

After years of defending their town against the terrors of Duskwood, the grim defenders of Darkshire are no strangers to horror or madness. This librarian appears to be searching for answers in forbidden tomes, but the search has clearly exacted a horrific cost. She may be selflessly sacrificing her humanity in order to defend her home against the coming darkness, or perhaps readily yielding herself to the Old Gods in exchange for dark new powers.