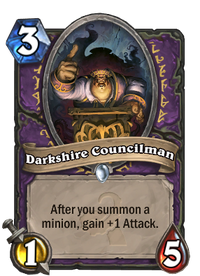 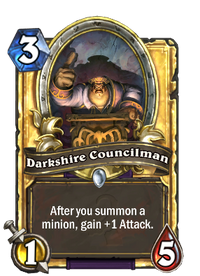 After you summon a minion, gain +1 Attack.

Darkshire Councilman is a common warlock minion card, from the Whispers of the Old Gods set.

Darkshire Councilman can be obtained through Whispers of the Old Gods card packs, or through crafting.

While its initial 1 Attack is very weak, the Councilman's 5 Health gives it a good chance of surviving long enough to get buffed and trade favourably. However, buffing its Attack immediately can ensure that the opponent is not able to trade into it without also losing their minions in the process. 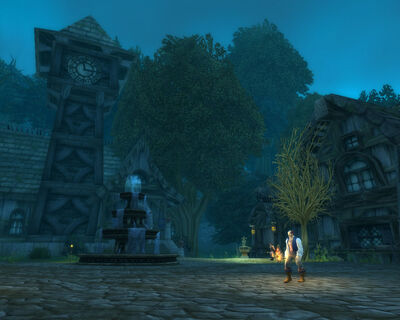 Darkshire in World of Warcraft

After years of defending their town against the terrors of Duskwood, the grim defenders of Darkshire are no strangers to horror or madness. However, this particular councilman is not what he appears. While he speaks in favour of the people of Darkshire, within him lurks a growing darkness, which serves only one master.