This article is using {{Card template}}.
See Help:Style guide/Card for how to edit this kind of article.
Edit this article
Darkshire Alchemist
38764 • OG_234
Regular 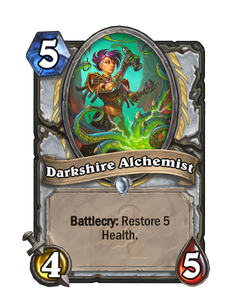 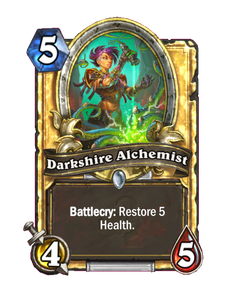 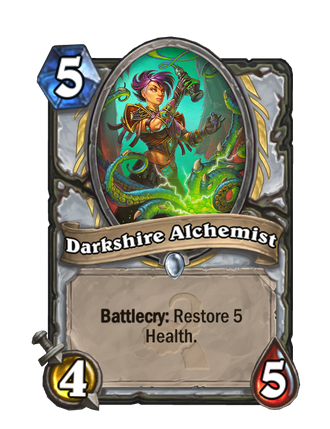 Darkshire Alchemist is a common priest minion card, from the Whispers of the Old Gods set.

Darkshire Alchemist is a very versatile card that can find a place in nearly any Priest deck. The heal for 5 can help you survive against aggro decks, and can also combo with

Embrace the Shadow to deal 5 damage to an enemy. While this would generally be used to remove an enemy minion, the damage can also function as burst in a class which normally has none. Alternatively, the heal can help keep one of your big minions alive.

After years of defending their town against the terrors of Duskwood, the grim defenders of Darkshire are no strangers to horror or madness. This alchemist appears to be experimenting with the alchemical potential of the strange new powers of the Old Gods, perhaps seeking a way to defend her home against the coming darkness.

Darkshire Alchemist was voiced by Misty Lee, who also voiced