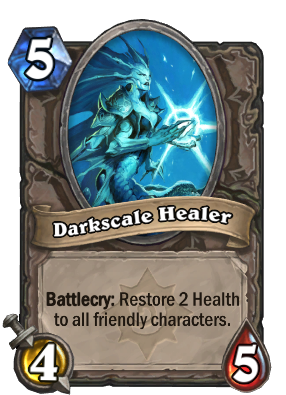 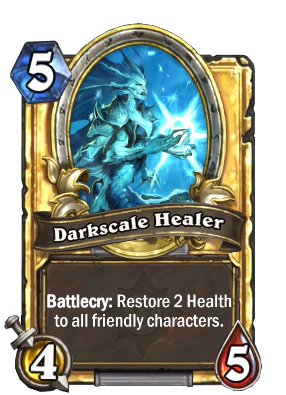 Healing is just something she does in her free time. It's more of a hobby really.

Darkscale Healer is a neutral minion card, inducted into the Legacy set, formerly from the Basic set. 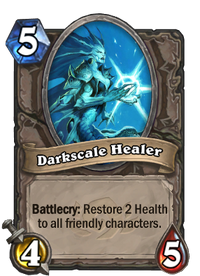 Two copies of regular and golden Darkscale Healer are automatically given after the player completes the Ranked's New player experience system, unlocking Wild and Classic format.

Attack
Where shall I strike?

Naga are sinister, ophidian humanoids that dwell beneath the ocean. Theirs is an ancient and mystical culture, for ten thousand years ago they were Kaldorei who mutated into vengeful humanoid sea serpents. While many remain on Azeroth to attempt to reclaim the surface world, a large group followed the power-mad betrayer, Illidan Stormrage, into Outland and proceeded to claim the watery areas of the shattered land. In addition to their natural longevity, a number of naga develop mutations that increase their life spans even further. Some are immortal.

Lady Sira'kess is one of the key leaders of the naga in the underwater zone of Vashj'ir. She is seen in the various Battlemaiden visions, courtesy of Earthen Ring member Wavespeaker Valoren.

During Defending the Rift, adventurers and Alliance/Horde forces briefly clash with her at the Abyssal Breach, where she is killed.