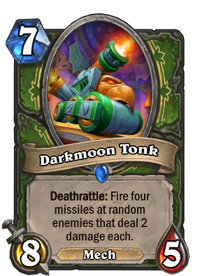 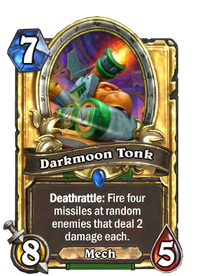 "Ready to roll out!"

Darkmoon Tonk is a rare hunter minion card, from the Madness at the Darkmoon Faire set.

The downside of this minion is that it's slow and its stat distribution is below average, but its upside is that its Deathrattle outputs a lot of damage.

To make the most out of this card, utilize Mech and Deathrattle strategies to its advantage. Oblivitron can summon it earlier, Nine Lives deals 2x4 damage for 3 mana, and Jewel of N'Zoth and N'Zoth, God of the Deep can be used to resurrect it. Maxima Blastenheimer can summon it to hit face for 8 damage plus another 8 damage to board or hero and put it in the resurrection pool. Wild has extra options like Fireworks Tech and N'Zoth, the Corruptor.

There are 3 achievements related to Darkmoon Tonk.

Darkmoon Tonk is a toy tank that can be purchased at the Darkmoon Faire and used as a companion.

A favorite of children across Azeroth, this tough little toy can withstand even the most aggressive imagination.