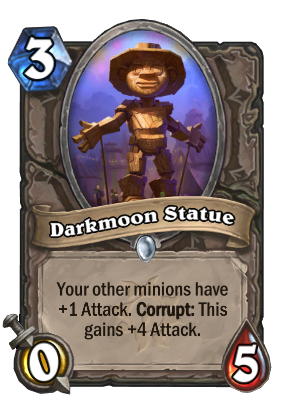 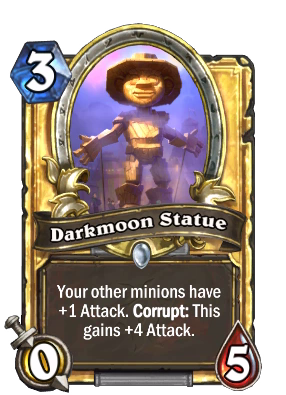 Your other minions have +1 Attack. Corrupt: This gains +4 Attack.
Flavor text

As far as workplace injuries go, Silas is protected by his statue of limitations.

Darkmoon Statue is a common neutral minion card, from the Madness at the Darkmoon Faire set.

Darkmoon Statue can be obtained through Madness at the Darkmoon Faire card packs, through crafting, or as an Arena reward. 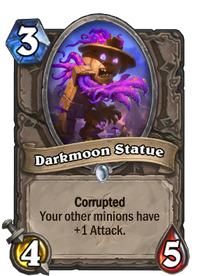 Darkmoon Statue provides an effect identical to Raid Leader's at the same cost. While it can be played un-Corrupted in a pinch, doing so leaves it vulnerable to enemy minions who can destroy it without suffering any damage in return. Instead consider corrupting the Statue using a token-generating card (such as Wispering Woods, Fiendish Circle, or Stand Against Darkness) then playing it as a follow-up next turn to buff any minions you still have; though your opponent will likely still be able to remove it, its body is now much more formidable and minions can't attack into for free.

If your deck runs Y'Shaarj, the Defiler, this minion is a decent body to resummon with the Old God's Battlecry. However, most Y'Shaarj decks don't have much use for this card's ability earlier in the game, so it can usually be swapped out for a more useful Corrupt card.