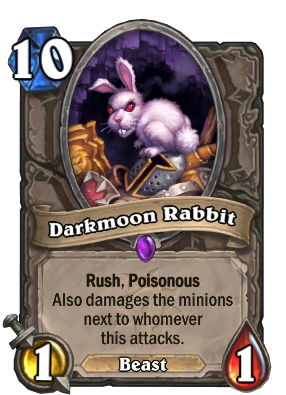 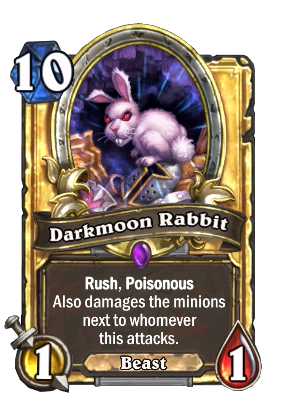 Rush, Poisonous
Also damages the minions next to whomever this attacks.
Flavor text

That's no ordinary rabbit! That's the most foul, cruel, and bad-tempered rodent you ever set eyes on!

Darkmoon Rabbit is an epic neutral minion card, from the Madness at the Darkmoon Faire set.

Darkmoon Rabbit's main use is killing three minions at once. While it is efficient at doing this, it leaves you with nothing on the board after using 10 mana, making it somewhat mana inefficient. The main advantage Darkmoon Rabbit has over cards like Twisting Nether and The Amazing Reno is leaving your board untouched, making it excellent for the niche situation of breaking a lategame stalemate on an even board.

Since this minion has to attack, you can play around it with Taunt minion on the edge of the board, meaning it can only hit two minions. Its Poisonous effect will also be blocked by Divine Shield.

As a Beast with a high-impact effect, Darkmoon Rabbit is a great target for N'Zoth, God of the Deep to resurrect.

Mages can use Luna's Pocket Galaxy to play this as a 1 mana three-for-one, as well as Warlocks with the Deck of Chaos. Master Oakheart can pull this from your deck alongside other minions like Mosh'ogg Enforcer and Witchwood Grizzly, establishing a strong board while clearing the opponent's.

There are 4 achievements related to Darkmoon Rabbit.

Darkmoon Rabbit is a level ?? boss rabbit at the Darkmoon Island Cave on Darkmoon Island. Upon attacking the beast, it will attempt to melee whoever has the most threat, and thus can be tanked while not casting its special move.