Hearthstone Wiki
Register
Don't have an account?
Sign In
Advertisement
in: All cards, Wild format cards, Eredar art,
and 2 more

This article is using {{Card template}}.
See Help:Style guide/Card for how to edit this kind of article.
Edit this article
Dark Wispers
2009 • GVG_041
Regular 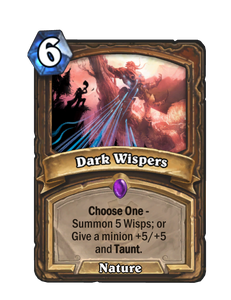 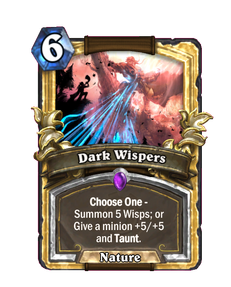 Don't worry; we fired the person who named this card. 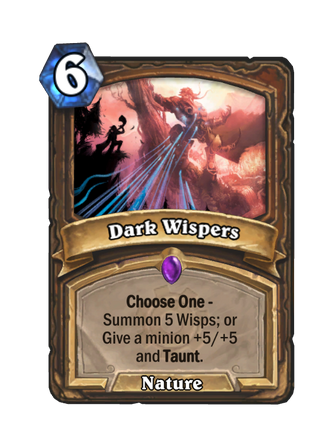 Dark Wispers is an epic druid spell card, from the Goblins vs Gnomes set. Its first Choose One effect summons 1/1 Wisps. 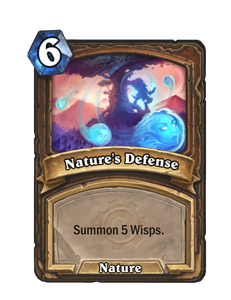 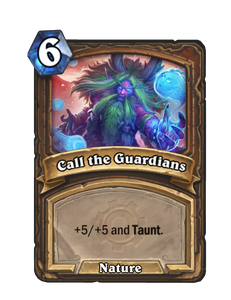 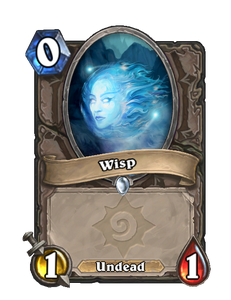 Enhance the Wisps with

Power of the Wild or

Soul of the Forest, or with

Poison Seeds for an expensive field equalizer. If you can defend them for a turn, you can also use

Savage Roar for 10 extra Attack. The first effect is one of the most card-efficient ways of generating damage from a

Knife Juggler, resulting in 5 damage for the expenditure of only a single card.

This spell's art depicts the defeat of Archimonde at Mount Hyjal during the Third War.

The demonlord launched a massive attack on the World Tree, Nordrassil. Malfurion believed Archimonde's goal was to draining the Tree's energies, which would drain the night elves of their source of power and immortality. However, Archimonde's target was actually to drain the second Well of Eternity to further his goal of gaining powers to rival those of Sargeras. But Tyrande and Malfurion had allied with

Jaina Proudmoore, as well as the Shadowtooth Dark Trolls and the Barkskin Furbolgs. Archimonde's ascent up Mount Hyjal was agonizingly slow, being forced to destroy every successive base with the help of Azgalor (Mannoroth's successor as leader of the Pit Lords), Rage Winterchill and Anetheron.

The bases, consisting of the humans, orcs and night elves, did slow his ascent — however, his cunning mind and monumental power enabled the Legion to destroy the bases one by one. First he destroyed Jaina Proudmoore's base, then Thrall's base, and finally he reached the night elves' base which he destroyed easily with a wave of his hand. Archimonde smashed the magical gates guarding the World Tree and started climbing the Tree. He grew in size as he climbed, determined to destroy the World Tree and consume its energies. The demon lord paid no attention to the seemingly harmless wisps gathering nearby.

As Archimonde attempted to rip the World Tree from the Well, Malfurion raised the Horn of Cenarius and called out to the ancestral guardians. Thousands of wisps rose from the surrounding forests and amassed around Archimonde, detonating in a massive explosion that destroyed the demon warlock and incinerated the forests around the World Tree; nature herself would not allow his defilement to occur. While the World Tree would eventually heal itself in time, Archimonde was gone from Azeroth forever.

Wisps of the Old Gods.