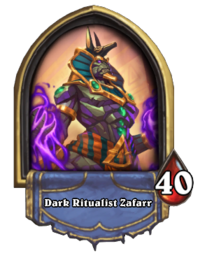 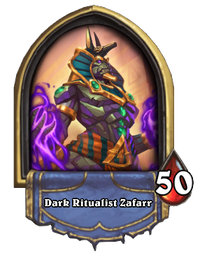 Likes his rituals like he likes his coffee: Dark. And twice-brewed.

Dark Ritualist Zafarr is a boss that can be encountered initially in Chapter 3 of Tombs of Terror. After completing Chapter 3, this boss encounter will be available in any completed chapter.

If Dark Ritualist Zafarr is not defeated before turn 7-8 then the battle has a high chance to be proceed unitl fatigue due to often resurrections of Khartut Defender and Wrapped Golem with boss' hero power and a lot of other taunts and spells providing powerful protection. So be prepared that most of the minions will die at trades during a long battle. In both modes try to play without Crawling Claw and Staff of Scales, if these treasures were picked and kill High Priest Amet as quickly as possible.

In Normal mode killing Zafarr before his constantly resurrecting Bone Wraith or Khartut Defender can be done with a fairly aggressive deck and boss' Generous Mummy. He may kill her with Wretched Reclaimer and reduce a cost of the player's cards even more. During a long battle it is possible to wait a bit and then narrow the pool of killed minions by stealing them with Addarah, Entomb or turning them into less dangerous minions using Hex, Scales of Justice, and so on. Also don't forget about Zafarr's removals, such as Shadow Word: Death or Entomb.

In Heroic mode Zafarr has several AoE and more options for summoning Taunt minions (Barnes, Psychopomp and others). This significantly complicates the possibility of quick victory, so it is unlikely to achieve without Silence effects and other minions' removing without activating their deathrattles.

Dark Ritualist Zafarr
How can I summon with all these interruptions?
The curse of flesh must refer to your smell.
Ugh, I need to get to my post-ritual rituals...

Your anger will suit me well.

You will serve me.

Your illusions are cheap.

Dark Ritualist Zafarr
I have seen worse sacrifices, I suppose...