This article is using {{Card template}}.
See Help:Style guide/Card for how to edit this kind of article.
Edit this article
Dark Iron Skulker
2291 • BRM_008
Regular 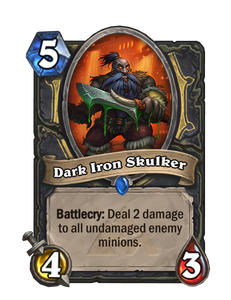 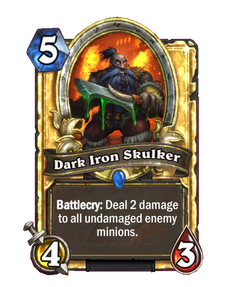 He loves skulking. He skulks after hours just for the joy of it, but his friends are pretty worried he'll get burnt out. 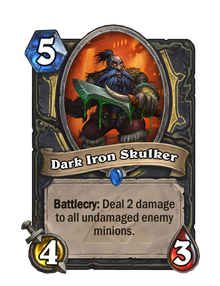 This is a very effective card against aggressive decks, which often flood the board with low Health minions. Because of their low Health, the Skulker's Battlecry will be enough to seriously damage or even destroy many of them. Any undamaged 1 or 2 Health minion such as Flame Imp, Clockwork Gnome, Knife Juggler or Whirling Zap-o-matic will be immediately destroyed.

This card alone can be a useful counter to cards that summon multiple minions in a single turn such as Onyxia, Mirror Image, Muster for Battle, Poison Seeds, Imp-losion, Wispering Woods, Shaman totems, etc. as well as any other minions played alongside them in the same turn. Dr. Boom is also a viable target, but Dark Iron Skulker becomes a possible target for Boom Bot detonations once played and still leaves Dr Boom himself remaining on the board.

Dark Iron Skulker can also be used in conjunction with effects that summon minions for the opponent, such as Leeroy Jenkins or Hungry Dragon to defuse any self inflicted threat. This card will be less useful against minions with more than 2 Health, although it can still be very effective if combined with other AoE such as Fan of Knives or Blade Flurry, or single target damage such as Eviscerate or the rogue's Wicked Knife.

Besides taking care not to place all your minions onto the board at once, the best defensive option against this card is to hit enemy minions whenever possible, ensuring as many of your minions as possible are damaged, even if only by a single point of Health. However, this will also make your minions more vulnerable to traditional rogue AoEs like Blade Flurry.

Summon
What lurks in the depths.

The Dark Iron clan is a clan of dwarves. These dark skinned dwarves were formerly ruled by Sorcerer-thane Thaurissan and vied for control of Ironforge with the Bronzebeard clan and the Wildhammer clan during the War of the Three Hammers. Now ruled by Moira Thaurissan, daughter of Magni Bronzebeard and widow of the late Emperor Dagran Thaurissan, the Dark Iron clan seek to forge a new future for themselves independent of the tyranny of Ragnaros and his minions, which has long been imposed upon them in their home of Blackrock Mountain. Under Moira's guidance, some of the Dark Iron clan have even moved into Ironforge to train the local dwarves in the ways of warlocks and mages.

This card's Battlecry is based off the card Backstab.[1]