This article is using {{Card template}}.
See Help:Style guide/Card for how to edit this kind of article.
Edit this article
Dark Iron Dwarf
348 • EX1_046
Regular 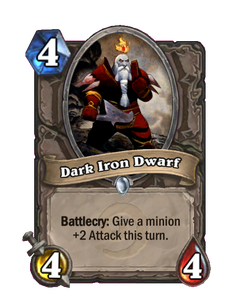 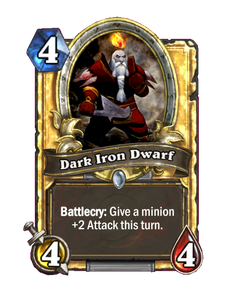 Guardians of Dark Iron Ore. Perhaps the most annoying ore, given where you have to forge it. 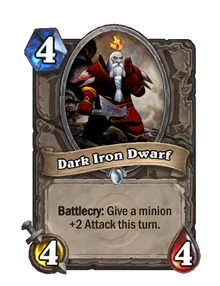 Dark Iron Dwarf is a common neutral minion card, inducted into the Legacy set, formerly from the Classic set. 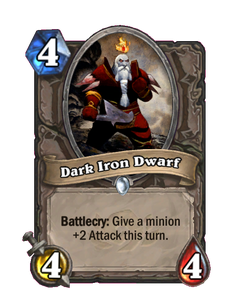 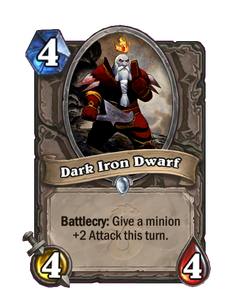 Two copies of regular Dark Iron Dwarf are obtained for raising sum of all your class levels to 1.

Two copies of golden Dark Iron Dwarf (Core) are obtained for winning 500 games across all classes.

Dark Iron Dwarf (Core) is uncraftable and cannot be crafted or disenchanted.

Dark Iron Dwarf is a fairly solid minion for its cost, and comes with a highly useful Battlecry. Though the extra Attack only lasts for one turn, it can be enough to kill an enemy minion without using more cards, or simply to deal more damage to an opponent.

Using the Battlecry on an enemy minion can be a situational but effective way of utilising the Priest's Shadow Word: Death or the neutral Big Game Hunter. Note that as the buff is temporary, playing the Dark Iron Dwarf without any friendly minions to buff is no longer detrimental.

The Dark Iron clan is a clan of Dark Iron dwarves. These dark skinned dwarves were formerly ruled by the Sorcerer-thane Thaurissan and vied for control of Ironforge with the Bronzebeard clan and the Wildhammer clan during the War of the Three Hammers. Now ruled by Moira Thaurissan, daughter of Magni Bronzebeard and widow of the late Emperor Dagran Thaurissan, the Dark Iron clan seek to forge a new future for themselves independent of the tyranny of Ragnaros and his minions, which has long been imposed upon them in their home of Blackrock Mountain. Under Moira's guidance, some of the Dark Iron clan have even moved into Ironforge to train the local dwarves in the ways of warlocks and mages.