Edit
watch 02:52
Roblox: DeepWoken - The Loop
Do you like this video?
Play Sound
Dark Cultist
Regular 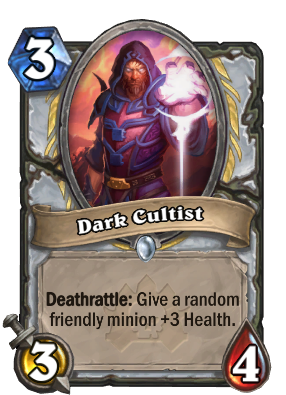 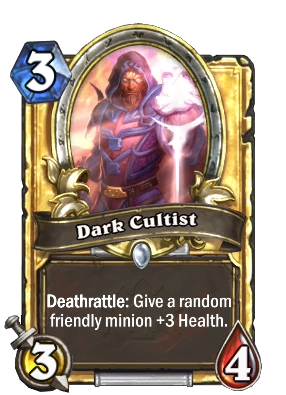 The Cult of the Damned has found it's best not to mention their name when recruiting new cultists.

Dark Cultist is a common priest minion card, from the Naxxramas set.

Two copies of regular Dark Cultist are obtained by completing the priest Class Challenge in Curse of Naxxramas.

As a Wild-format card, both regular and golden versions of Dark Cultist can also be crafted for the following amounts:

The Dark Cultist is a strong minion on its own - 3 Attack is respectable, and its 4 Health means it will be able to live after trading with most early game cards, thus bypassing the problem most 3-cost minions have. On top of this, the Cultist's Deathrattle gives it the potential to grant even more stats to other minions.

If there are no other friendly minions on the board when the Cultist dies, the Deathrattle will be wasted. Opponents can minimise its impact by destroying other minions first, or strategically determining which minion will gain the buff.

Destroying a Dark Cultist at the same time as all other minions on the opponent's side of the board will cause the Deathrattle to be wasted, as it will not trigger until after all of the other minions have been destroyed.

Attack
My fate is sealed.