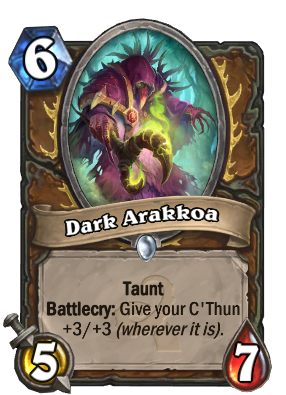 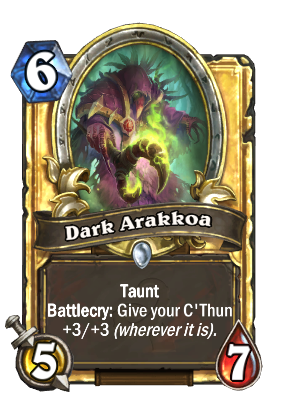 Taunt. Battlecry: Give your C'Thun +3/+3 (wherever it is).
Flavor text

There's a whole gradient of Arakkoa! This one is on the darker side.

Dark Arakkoa is a common druid minion card, from the Whispers of the Old Gods set.

Dark Arakkoa can be obtained through Whispers of the Old Gods card packs, or through crafting.

Summon
The Ancient One caws.[4]

Dark Arakkoa is a very solid druid card, providing C'Thun a generous +3/+3 buff as well as having a sturdy 5/7 Taunt minion, for only 6 mana, making it even a valuable card in non-C'Thun decks.

In a C'Thun focused deck, this card is also worth pairing with Twilight Elder, as both benefit from a solid statline as well as the fact that their combined effects quite easily achieve the 10 Attack requirement that other C'thun related cards have.