This article is using {{Card template}}.
See Help:Style guide/Card for how to edit this kind of article.
Edit this article
Darius Crowley
47053 • GIL_547
Regular 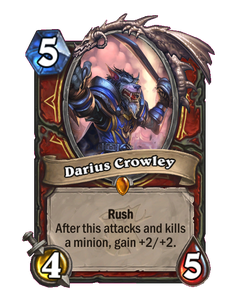 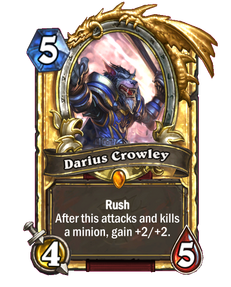 You either die a villain, or live long enough to see yourself become the hero. 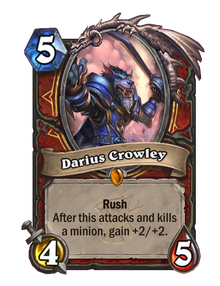 Darius Crowley is a legendary warrior minion card, from the The Witchwood set.

Despite his Boogeymonster-like effect, having Rush makes him far more versatile. This card is good for early game for punishing low-tempo, low-attack minions. Even as a damaged 6/6 he can be difficult to deal with if the opponent lacks a proper answer to him. If you are able to keep him alive, he becomes a threat that the opponent has no choice but to deal with. As a downside, if Darius does not have low-attack minions to trade with he becomes less effective. He has good synergy with Woodcutter's Axe, making him more devastating.

Lord Darius Crowley was once a Gilnean nobleman. A pro-Alliance figure, he dissented with King Genn Greymane's decision to separate his people with the Greymane Wall. Crowley led the Northgate Rebellion that caused a civil war in Gilneas, during which he was imprisoned. When Gilneas was attacked by worgen, he was freed and became a worgen himself. Both Crowley and Greymane reconciled and joined forces against the threats Gilneas faced. He now leads the Gilneas Liberation Front which fights against the Forsaken along with the Bloodfang pack and the 7th Legion.

When the Burning Legion returned to assault Azeroth, Darius and his daughter Lorna joined Genn Greymane on the Skyfire as part of his army forces.

Despite a colorful past, Lord Darius Crowley has earned an unassailable reputation among the people of Gilneas. Once disgraced and imprisoned for leading a rebellion against King Genn Greymane, Crowley nonetheless proved himself a staunch defender of Gilneas in conflict after conflict. Due to his exemplary service—not to mention dauntless ferocity—he and his once-bitter rival now pay one another grudging respect. King Greymane knows who he can call upon when he needs results at any cost.

Crowley is eager to crush Gilneas’ enemies in the Witchwood, and he is approaching the problem as he would a military campaign. While some might turn to mystic trinkets or ancient superstitions to get an edge, Crowley has yet to encounter a threat that well-crafted iron, steel, and wood could not dispatch, especially when explosives are involved. Darius has the city’s genius engineers working the foundries night and day to construct engines of war—cannons in particular.

When Crowley’s confrontation with the monsters in the Witchwood comes, it will not be quiet.[1]