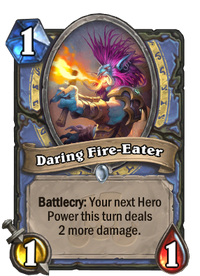 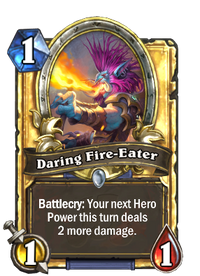 Battlecry: Your next Hero Power this turn deals 2 more damage.

A few hours later he DESTROYED the arena bathrooms.

Daring Fire-Eater is a common mage minion card, from the Rastakhan's Rumble set.

Daring Fire-Eater can be obtained through Rastakhan's Rumble card packs, or through crafting.

Daring Fire-Eater is a simple 1-drop that enhances your Hero Power, allowing Mages to deal 3 damage with their Fireblast for 2 more mana. It's particularly useful for cards that synergize with the Hero Power such as Spirit of the Dragonhawk, but especially important for reaching the damage threshold Jan'alai, the Dragonhawk needs to summon Ragnaros.

It's also useful for Frost Lich Jaina's Icy Touch for killing a minion more easily to summon an Ice Elemental.